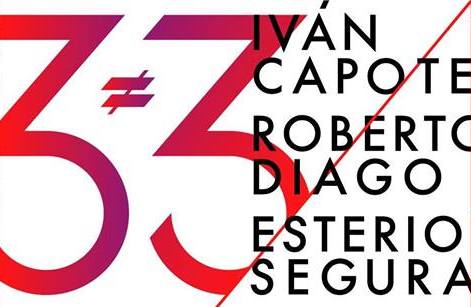 Continues open to the public 3 ≠ 3 in Galería Habana

Until next June 14, the exhibition 3 ≠ 3 is open to the public in Galería Habana, with works by Esterio Segura (Santiago de Cuba, 1970), Roberto Diago (Havana, 1971) and Iván Capote (Pinar del Río, 1973); members of the payroll of this institution that for decades represents very important figures of contemporary Cuban art.

Inaugurated within the collateral program of the XIII Biennial of Havana, the exhibition returns to the work of three artists already included in the collective Dashed Lines, presented there last February also under the curatorship of Chrislie Perez, specialist of that institution.

The particular treatment that each of them gives to the space in the different expressions of the visual arts that they cultivate, is the guiding thread of this proposal that already in the own title points to the three-dimensional, assumed from the differences of their poetic personal.

The anthropological and self-referential, recurrent in the work of Esterio Segura, are evident in the three pieces of his authorship now exhibited in Galería Habana, whose titles respond once again to the artist's purpose of offering the viewer a door through which can penetrate the reflection or concept that underlies each of his proposals.

The book, as a symbolic receptacle of the thought and knowledge of the human species, is the vehicle of expression selected by him in the species of friezes that are the sculptures Landscape with 8 reasons not to say what I think and The right not to say what I think, made with pigmented earth, resin and fiberglass; as well as in the installation Eight million great ideas that you will never know, made in steel and paper; all of 2019.

In the case of Roberto Diago, an immense structure made in 2018 with wood and wire is presented to the public. Resisting without regrets refers from the title to the sacred wall of Judaism and, by its conception from recycled materials, to the historical resistance of our people; in particular of that segment of the population descended from African slaves, to which he has paid particular attention throughout his artistic life.

From Iván Capote, the sculptures of 2018 Act and Oxide are presented in 3 ≠ 3, the latter a faithful example of his attachment to the use of morphemes in his visual proposals. In the present opportunity it is the English word Trust, which distills traces of rust on the wall where it is placed, in clear devaluation of the concept that it carries.

These artists had a significant presence in the XIII Biennial. In addition to the exhibition at Galería Habana, still open to the public, Esterio Segura participated in the project La pauta que conecta of Fábrica de Arte Cubano; Roberto Diago, in The infinite possibility of the National Museum of Fine Arts; HB. Exhibition of contemporary Cuban art, presented at the Gran Teatro de La Habana Alicia Alonso; as well as in Behind the Wall; while the work of Iván Capote was part of the collective entitled Intersecciones, made in Factoría Habana.

Previous publication "Habaneros" by Julien Temple at Buenos Aires Bafici Next publication Rain and Fire, by Issac Delgado, with many aromas