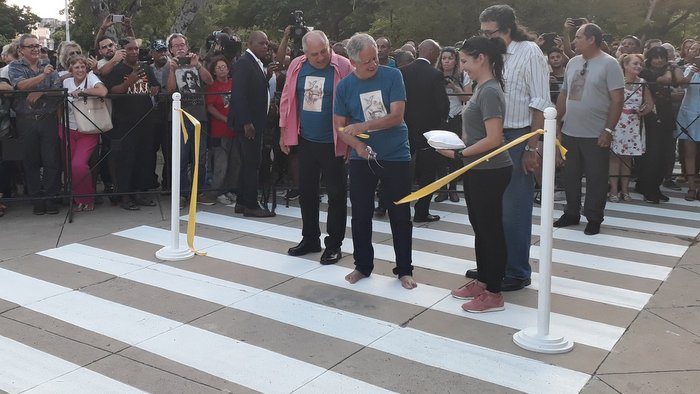 Cross the zebra with the four from Liverpool

He takes care of the boy and the stroller while his daughter goes to the bank to take a picture with her idol. In the past, when he did not dream of being a grandfather yet, he went to the parties in boots - as the Varelian song says - singing a song from which with his glasses has become an eternal presence in a park in Vedado.

Next to a lamppost, a group of twenty-year-olds plays a guitar and recalls old songs that there is no way to erase them from the collective imaginary because they have fed the joys and worries of their parents and themselves. Almost without pretending, with each note and each word frighten the pseudo art hidden in any corner of the contemporary.

A little boy takes off his skates and discovers that those songs that are put on the speakers are not bad. He throws himself on the grass and decides to return home later and call his girlfriend on the cell phone for her to join him.

And of course good artists are not missing—Digna Guerra and her National Choir of Cuba, Luis Manuel Molina, the Chantra duo… - who take the stage to perform very recognizable songs, accompanied by a painting created by Ernesto Rancaño and Juan Carlos Balseiro for the occasion.

All have joined the call of the Yellow Submarine Cultural Center and its main promoter: Guille Vilar, for, with the support of the Ministry of Culture —presenting were Minister Alpidio Alonso and Abel Prieto, director of the Martian Program Office— , pay tribute to The Beatles in Lennon Park in Havana fifty years after one of his most important albums was released in the United Kingdom on September 26, 1969: Abbey Road, produced and orchestrated by George Martin, the last one that the mythical band composed of John Lennon, Paul Mc Cartney, George Harrison and Ringo Starr recorded.

As the writer and researcher López Sacha said on the evening, “The Beatles were working on a feeling of harmony after having experienced enough in the White Album and having achieved a discussion space that did not come to public light with the songs that they recorded for orchestra and for the album Let it be. This album comes out as a kind of revival of The Beatles towards rock, but especially towards the most intelligent ways, towards progressive rock and certain forms that had not been experienced before. Rock is now part of the musical thought of the second half of the twentieth century.

When you talk about a fundamental album for the career of the most important musical group of the last century, you can calibrate the legacy of those songs and an LD that left one of the most imitated images in recent years: that of the four members of the group crossing the zebra adjacent to the studies that name the phonogram.

The Cubans, and all those visitors who arrive at the Lennon Park every day to take a picture next to the sculpture made almost twenty years ago by the National Plastic Arts Prize José Villa Soberón, will now have their zebra in the Cuban way that a group of enthusiasts painted on the corner of 17th and 6th streets. The ribbon was cut by Guille, a stubborn guy who has been determined not to let The Beatles die on this small Caribbean island. Hence his words: «Lennon is very happy to have decided to live among us, to establish permanent residence in this country, in this city, in this park that bears his name. He will walk through his zebra, the one that a musician of his professional stature deserves, the one that men who, like him, have imagined that a better world is possible ».

Below we reproduce the words pronounced by Guille Vilar on the spot:

The zebra we have make to Lennon

When I visited Sir George Martin, the fantastic producer of The Beatles, in 2002, I had the privilege of attending him personally and of course I invited him to see the statue of Lennon. I remember it was a cool summer morning and we were just the two of us. Of course, I stood a respectful distance because it was the statue of his beloved missing friend, but I was close enough to realize that he was so impressed with this that he decided, although very shortly, to talk briefly with Lennon. And if I tell you this, it is to assure you that not only George Martin spoke with Lennon, because we know that many of you have sat next to him to start a conversation. And I, not to be outdone, tell you that we have already talked a few times, just like you. Therefore, do not be surprised when you say that Lennon is very happy to have decided to live among us, to establish permanent residence in this country, in this city, in this park that bears his name. And he realized that possibility since Carlos Alfonso and I did the first concert in this place in 1990. It was such a beautiful event that he quickly realized how much we Cubans want it. And he asked us if we could repeat the experience and we did so several times until an event occurred that no one imagined. The statue made by Villa Soberón to John Lennon, was revealed no less than by Commander in Chief Fidel Castro with Silvio Rodríguez on December 8, 2000.

Such a deference left him so impressed that he let us know of a historical photo taken at his home in England, where he appears with his wife Yoko Ono in the kitchen, but the really surprising thing is that, on the wall among other paintings, was a poster with the emblematic photo of Ernesto Che Guevara in Korda. To good understanding ... (c) By the date of the photo, this was taken at the time that Imagine was recorded. Afterwards, the park witnessed other concerts and Lennon never ceased to be astonished as the one where he participated until the National Concert Band playing music by The Beatles. But what really drove John crazy with our things, was when in 2011, the Ministry of Culture decided to inaugurate the Yellow Submarine Cultural Center, headquarters so that our musicians not only play their music and that of The Beatles but also that of The great classics of the genre. Lennon wanted to visit us, but he didn't know how to get there. So, on a day like today, when we celebrate 50 years of Abbey Road, that album that has The Beatles on the cover crossing the famous London zebra, a set of many good Cubans, also decided to make Lennon his zebra, his Creole zebra. I do not speak of a “little zebra” of 7 or 9 stripes on 6th Street. It is a large stripe zebra that like a red carpet, will allow Lennon to go every night to the Yellow Submarine to have a good time with all of us, and with all of you.

On the cover: Guille Vilar inaugurates the zebra with the Cuban culture minister, Alpidio Alonso and Abel Prieto, director of the Martian Program Office

Next publication Iberostar and the 500th of Havana