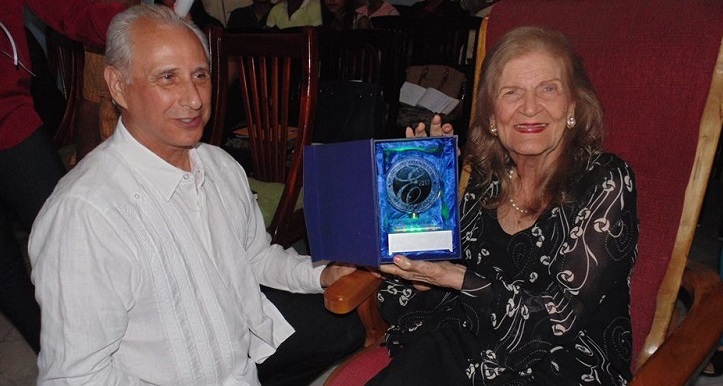 Cuban Poetess Carilda Oliver Died at the Age of 96

isel 29-08-2018
The National Literature Prize (1997), Carilda Oliver Labra, died at the age of 96 at his home in the Cuban province of Matanzas.
Named the bride of that city, Oliver Labra is considered one of the most outstanding poetesses of Cuba and Latin America, and author of an extensive literary work.

Among this prolific creation is South of my throat (1949), poem reissued six times; Canto a Martí (1953); Canto a Matanzas (1955); and more recently, A Woman Writes, and Lirica Biography of Sor Juana Ines de la Cruz (2013), as well as composing sonnets.

Her Anthology Poems to love keeps the verses I am disordered love, I am disordered, recognized ode to that feeling that traveled the world for the eroticism embodied in him, characteristic in several of his compositions.

Multiple awards and recognitions endorsed the prolific literary career of the writer, as an award obtained in the International Poetry Competition, organized by the National Broadcasting Co. of New York, United States (1947).

She was also awarded the National Prize for the Hispanic American Competition of the American Athenaeum in Washington, on the occasion of the tricentenary of Sor Juana Ines de la Cruz (1951), the year in which he was awarded the Centennial Commemorative Medal of the Cuban Flag.

At that time, the poetess also received the Second Prize for the National Prize 'Henández Catá', for the story La modelo; wrote and published in 1953 Canto a Martí for the centenary of the birth of the Apostle and with this work he won the National Prize of the contest.

The writer was declared an Eminent Daughter of the Athens of Cuba in 1954.

In March 2018 she received the Excelencias Prize for his entire creation, an award that in Cuba recognizes personalities, organizations and institutions that promote the development of the island in various sectors.

The author of Canto a Fidel treasures about 40 books published and taken to English, French, German and Bulgarian.
Previous publication Manuel Alcalá. "Everything is Matter" Next publication Trinidad to Host the Route of Rumba International Festival in Cuba