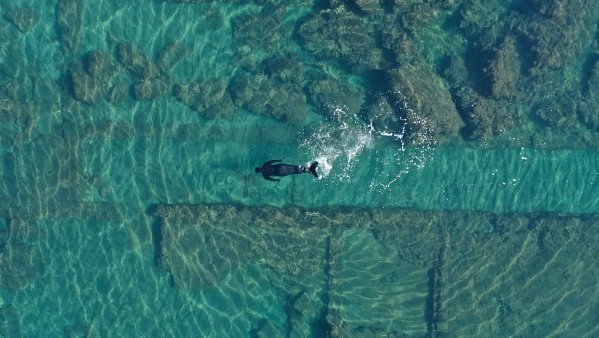 Visual artist and filmmaker Emilija Škarnulytė (b. 1987, Vilnius, Lithuania) researches the psychological power wielded on us by our environment.

Her videos and multi-media installations interweave fiction with documentary films in order to reflect upon the invisible relationships between the physical world and our social power of imagination. The subjects explored range from the perception of geological time and its influence on our relationship to history to the way in which immense conflicts inscribe themselves on the earth's structure.

Sunken Cities (2021) is an immersive video and sound landscape that runs through all spaces of the first floor. In rooms functioning as a timeline, visitors are immersed in a multi-dimensional landscape, devoid of human beings, in which the mythological figure of the siren, "representative of the magic and the mystery of quantum mechanics" (according to Roger Penrose) appears. In between nature and technology, human and non-humanoid creatures, the siren seems to return from the future in order to look at "the ruins of human activity seen from a distant future", Škarnulytė says.

On the second floor Emilija Škarnulytė is showing films that investigate singular moments in time and space. Alongside video works objects, photography and mosaics complement the exhibition.