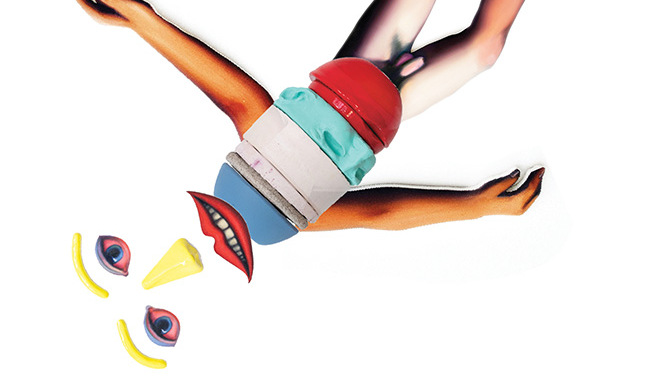 It is romantic if you think it over, a house full of body parts aiming to become a creature: heads, eyes, breasts, arms. Segmented limbs collaborating with a house to craft a new organism, putting together each frustration, each loss, each memory. A communion of objects that despite all the ambitions they hold, despite all the desire they experienced, cannot help falling.

The Partial Object House is Ivana de Vivanco’s first solo exhibition in London. The Chilean-Peruvian artist conjures on this occasion a series of works focusing on the body as an accumulation of different parts infused by psychoanalytic theories. The artist invites the audience to inhabit a dissected anatomy, dedicating each floor of the building to a different fraction of the body.

Don’t you find this romantic? I cannot help thinking it is – maybe it is more of another kind of romanticism, the dark one typical from England, so cloudy, a bit deadly and sometimes uncanny. Like a modern Frankenstein laying on the couch in conversation with his therapist trying to understand all the memories from his recently discovered limbs. Nevertheless, the best way to figure it out is it to get into this body-building and explore it from within. It is indiscreet, but let’s take this chance.

We start from the head, we enter from there because the body is constantly falling and therefore, it is upside down. The head is the basis, it is holding this creature to the earth. The head is the meaning factory that will add content to the rest of the parts, the space for the trauma, the anxiety floor. All these emotions articulate in the room through de Vivanco’s imagery in works such as Von zu viel Sorge. This painting is inspired by the fifteen Century book The ship of fools by German theologist Sebastian Brand, which combines texts and engravings collecting different examples of human stupidity. Of the excessive concern – which inspired the artist to create this painting and gave it its title – it’s one of these examples and speaks about of our absurd obsession with carrying more than we can take. This feeling manifests in the painting through a central character who cries a pool of tears while another one caresses her head bewildered. This scene is a good example to understand how the head functions, trying to figure out an unreachable present that leads us to a constant distress.

While we ascend in the building we descend into this body and, after the convoluted head, we come into the guts, the stomach, the digestive tract. Here, in the belly of this creature, the body functions as a machine, processing food and taking what it’s needed to keep us alive. It is in here where emotions hurt. I am sure you have lost your appetite when something once touched you deeply, or made a choice following a gut feeling. De Vivanco creates this ready-to-assemble living machine to explore the connections between our guts and our social relationships, from belly butterflies to upset stomachs. The painting Odd Breakfast represents well these emotions in a theatrical scene where a few characters sit around a table. The breakfast has reunited them, but no one seems to be really there.

The top of this house is the bottom of this fictional figure, the legs, feet, toes. It is the floor of movement or its absence. Here the characters fool around, like Martha and Charles, two works by de Vivanco with interchangeable body parts. The legs of one character can be stolen by the other and they can dance and rename themselves inventing hybrid genders. On another wall a squared character looks at the scene. He/she has become one with the space after a long quarantine.

I think it’s romantic if you think it over. Ivana de Vivanco has created here a queer romanticism that is infused by her Latin American heritage; it is colourful and theatrical; it is ironic and sad. Deliberately uncanny, but bright and colourful like a carnival or a cathedral, this humanoid house is filled with stories narrated through scenes and sculptures that transcend the canvas. Altogether they draw a character that, as every human, is an accumulation of different parts, a compilation of many unique stories impregnated in each corner of our anatomy.

IVANA DE VIVANCO (b. 1989 in Lisbon) is a Chilean-Peruvian artist based in Germany. Her practice conjures up theatrical scenes with uncanny atmospheres full of metaphors and sociopolitical references with a big influence from Latin American Baroque – the most colourful and painful Baroque of all since the wound of colonisation has remained inscribed in it -. This influence manifests in a body of work where the use of colour is aggressively bright encouraging different painting rhythms – from velvety surfaces to expressive marks and raw gestures – and characters whose forced expressions transmit a subtle discomfort. Her figurations sometimes transcend the canvas through sculptural works where she transports her scenes to another dimension, inviting the audience to become part of this bizarre pantomime.

She studied fine art at the University of Chile in Santiago and at the Academy of Fine Arts in Leipzig. She has been a grant holder of DAAD, the Heinrich Böll Foundation, the Cultural Foundation of Saxony and she was awarded with the Marion-Ermer-Prize for young artists in 2015. Her work has been featured on 100 Painters of Tomorrow (Thames & Hudson), Elephant Magazine, Relieve Contemporáneo and Le Quotidien de L’Art, among others. She recently exhibited at the Museum of Contemporary Art in Santiago, Kunsthalle Darmstadt, 68 Projects in Berlin and The RYDER Projects in Madrid.

Previous publication Artlatinou. Woven Resilences Next publication Male Nudes. A salon from 1800 to 2021