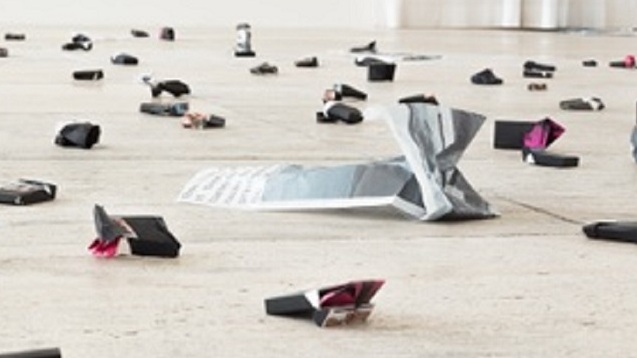 Ojos de garganta is an installation and performance by Isaac Olvera (1982, Zacatlán, Puebla). Consisting of some 200 discarded cigarette boxes strewn on the gallery floor, each containing a text derived from everyday incidents and encounters on the streets of Mexico City that the artist has been observing and recording in a diary since 2016. These objects and texts become the material for a performance lecture by the artist that will be screened on the Museo Jumex website. Texts are chosen at random, and the artist and invited guests who perform inhabit the roles. Rather than reconstructing the original history, the fragments of events and conversations build their own temporal narrative through this encounter.

Isaac Olvera is interested in narratives that forge connections between himself, exhibition visitors and with liminal characters in daily life. Whether focusing on individuals such as his alter-ego Natasha, who the artist channels in the form of a medium; the search for Edgar Poet after finding one of his poems on the street; or through observing the conversations and interactions between the stylists and their regular customers at a local hairdresser, Isaac Olvera looks for points of contact and intimacy with the usually overlook majority that makes up life in the city.

Originally performed for a participating audience, Olvera returns to Ojos de garganta to reconsider the live event choreographed for the screen with guests taking on the dual role of participant and camera person. The project continues a series of exhibitions at the museum where invited artists consider how their practices operate in both physical and digital spaces simultaneously.