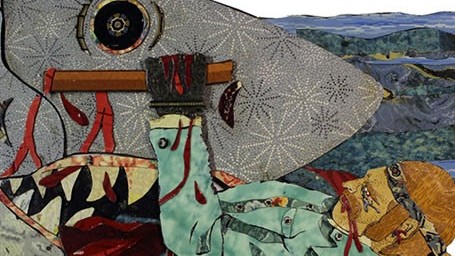 New Exhibition by Bill Miller "The Shark Ode to the Sea"

The Exhibition is the kick-off in artAmore Sitges, to Celebrate World Oceans Day.  artAmore Sitges wants to contribute to put a grain of sand to spread and support the raise of environmental awareness through art, and to attract attention to the problems generated by waste.

Bill Miller is a collage artist who has been using vintage linoleum flooring as his medium for almost 20 years, and currently lives in Pittsburgh, Pennsylvania.

Linoleum was the ultimate interior medium, present in all aspects of 20th century life from Grandma’s kitchen to the corner drug store and neighborhood school. Miller’s innovative work is recognized for pictorial assemblages that rely only on the flooring’s found surface, with no added paint, to render his subjects. His unexpected use of familiar patterns taps into the medium’s nostalgic qualities, imparting a sense of personal history and rediscovery within each piece.

In 2012 Miller was chosen to create the artwork for the 13th annual Woodstock Film Festival, joining notable artists Peter Max, Milton Glaser and Bill Plimpton who were previously selected for this honor. Miller’s work was displayed in Barcelona during Drap Art, a juried international exhibition of recycled art.