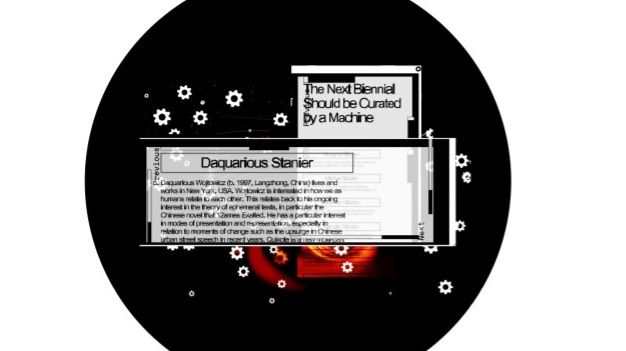 The Next Biennial Should Be Curated by a Machine

The Whitney announced the launch of The Next Biennial Should Be Curated by a Machine, an artificial intelligence project commissioned for artport, the Whitney's portal to Internet art and online gallery space for commissions of net art. Developed as a collaboration between artists UBERMORGEN, digital humanist Leonardo Impett, and curator Joasia Krysa, the project reimagines the future of curating in the light of artificial intelligence as a self-learning human-machine system.

The Next Biennial Should Be Curated by a Machine uses a group of machine learning processes to "curate" a series of imagined, constantly evolving biennial universes. Collectively named B3(NSCAM), the featured software takes data sets from the Liverpool and Whitney biennials—as well as various other sources, including Rolling Stone magazine—and processes them to calculate a future probability for words to appear, generating endless combinations of possible biennials in flux. These imagined occurrences, or biennial universes, manifest as texts—seemingly conventional artist biographies, curatorial statements, press releases, and art magazine reviews—which engage in a continuous process of rewriting themselves. Ever fluid and ungraspable, the texts are presented in browser windows that appear on top of a variety of animated visual backgrounds, alluding to the sixty-four parallel universes of possible biennials constructed by the AI.

"The alternate, parallel universes constructed by the AI reflect the curatorial and institutional desires embedded in the data on which the software has been trained," said Christiane Paul, adjunct curator of digital art at the Whitney Museum. "The AI engages in a kind of cultural apophenia, the tendency to see meaningful connections between seemingly unrelated things, and reveals hidden patterns."

Audiences enter the project through an interface that depicts a twisting black and white vortex overlaid with sixty-four spinning wheels. Clicking on an individual wheel launches a new biennial universe on an animated background constructed from a range of sources, from NASA and sci-fi imagery to pop culture. Each universe is accompanied by the soundtrack of a TikTok playlist, referencing the mix of creative expression and preconfigured elements in digital tools. The respective universes are created by subtle changes in the software's parameters, for example, giving more weight to one data set over another or simply generating variations of biographies for artists with the same first or last name. Together these textual and graphic universes of biennials narrate and visualize the impossible, absurd endeavor of an AI to curate on the basis of what it has learned from sources compiled by people and human understandings of art.

The Next Biennial Should Be Curated by a Machine is commissioned by Liverpool Biennial and the Whitney Museum of American Art, with support from Liverpool John Moores University, Pro Helvetia, Federal Chancellery of Austria, and the City of Vienna. At the Whitney, the project is overseen by Christiane Paul, adjunct curator of digital art. The project is accessible anytime through the Liverpool Biennial's website and the Whitney's artport: https://whitney.org/exhibitions/the-next-biennial.