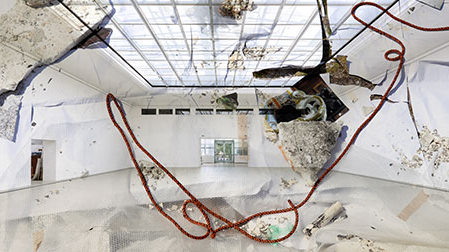 Yesterday becomes today, top becomes bottom, inside becomes outside: the shift in paradigms and perspectives is the nexus of content in the solo exhibition "The Sky Opens Twice" by the Berlin-based artist duo Peles Empire, on show at the Künstlerhaus, Halle für Kunst & Medien (KM– Graz). Several large-format new productions toy with the perception of exhibition visitors by adapting, mirroring, and distending the venue’s architecture. The sky of the main hall on the ground level of the Künstlerhaus spreads out across the space, while a large-format piece on the exterior wall of the Künstlerhaus apse reveals a glimpse of the exhibition room inside. "The Sky Opens Twice" illustrates the variability of reality, indicating how the present—even if not always immediately apparent—draws on the past. The exhibition invites visitors to engage in dialogue and to expand the horizon.

The agenda of Peles Empire involves scrutinizing the relations between original and copy, but also repetitively applying various reproduction techniques. For over a decade now, the artist group has been devoted to the interplay between origin and repetition. Serving as a historical visual template for all of their work are photographs of Peleș Castle in the Romanian town of Sinaia. However, the current sculptures and spatial installations usually only vaguely reference their source, which is in fact almost invisible due to prolific copying. The connection between exhibition site and their own work is a programmatic principle for Peles Empire, one that is continually put into practice. Thus, through interaction among two- and three-dimensionality, citation, transfer, and new connotation, a new perspective on past and present opens up with each new exposition. The Künstlerhaus in Graz finds resonance in the collective’s visual repertoire several times over: besides an intensive exploration of the current appearance of the venue, visual citations are found in the exhibition from the founding era of this magnificent structure built in 1952 under the auspices of White Modernism.

"The Sky Opens Twice" (2019) is the title of the large-format installation in the main hall of the venue, commissioned specially for this exhibition. It also references a page from the first collage novel by Max Ernst, "La femme 100 têtes," from the year 1929. The sky above the Künstlerhaus appears to open, as the title indicates, for the portrayal of the large ceiling of windows over the exhibition hall, measuring 100 square meters, which now also extends over its lateral walls. The source motif for the sculptures presented in this room—made of Ming porcelain, clay, jesmonite, wax, styrofoam, and rope—is a photograph showing a marble column featuring a lion statue in the garden of Peleș Castle. Upon longer contemplation of the subject, which is printed on the exhibition’s invitation card, its absurdity becomes clear: the juxtaposition of the present and history of the scene is surreal and simultaneously a typical attribute of the art of Peles Empire. It seems as if the magnificent column were being reappropriated as a pole for spanning cables, yet it is merely supporting the sky.

Peles Empire repeatedly renders the Romanian castle of historicism through their selection of methods and materials. Moments of simultaneity and opposition are pivotal here. For example, the artists purposefully reference processing techniques and genres from previous centuries again and again. For "The Sky Opens Twice," the collective created a monumental trompe l’oeil—an allusion to the illusionistic-seeming Flemish still life painting of the seventeenth and eighteenth centuries—which runs across the main hall of the Künstlerhaus as a mirroring of the ceiling of windows above the walls. A blend of real and reproduced artworks, of their sites of origin and presentation, plays tricks on the human eye here: like its historical archetype, the digital print composed of A3 photocopies simulates a sense of three-dimensionality, though in reality no space is actually there. The non-hierarchical juxtaposition of the rendered materials allows the gaze of the beholder to extend beyond the exhibition space, enabling him or her to become immersed in an almost surreal situation, where history is no longer approached linearly.

The exhibition facilitates a fictive view of this Graz art venue from the outside in: another large-format trompe l’oeil with a distorted perspective into the exhibition hall has been attached to the exterior side of the building’s apse. Even if this in turn involves an optical illusion, the implied inviting gesture of "The Sky Opens Twice" is absolutely serious. From the very outset, the work of Peles Empire has been founded on the act of coming together through art and on an understanding of the exhibition as a space of discourse within society. It is for this reason that the artists have reconstructed, in the apse of the Künstlerhaus, a bar that was first on show in 2017 as part of the Skulptur Projekte in Münster. In the program accompanying this exhibition in Graz, the bar functions as a site of gathering for artist talks, lectures, screenings, and readings in the Künstlerhaus.

Peles Empire was founded in 2005 in Frankfurt am Main and involves the artists Barbara Wolff (1980 Făgăraș, Romania, lives in Berlin) and Katharina Stöver (1982 Gießen, lives in Berlin). Both artists studied at the Städelschule in Frankfurt under Wolfgang Tillmans, Michael Krebber, and Hermann Nitsch and at the Slade School of Fine Art and the Royal Academy Schools in London. They participate in exhibition projects across the globe as Peles Empire, most recently at Modern One of the Scottish National Gallery of Modern Art in Edinburgh (2019), the Neuer Berliner Kunstverein in Berlin (2019), the Skulptur Projekte in Münster (2017), the Kunstverein Hannover in "PRODUKTION: Made in Germany Drei" (2017), and the Kunstverein Kassel (2017). Alongside their own artistic activity, the artist duo has been running a project space for over a decade, where people come together for exhibitions and events. Over time, the space “Peles Empire” has had branches in London, Frankfurt, Berlin, and the Romanian city of Cluj.