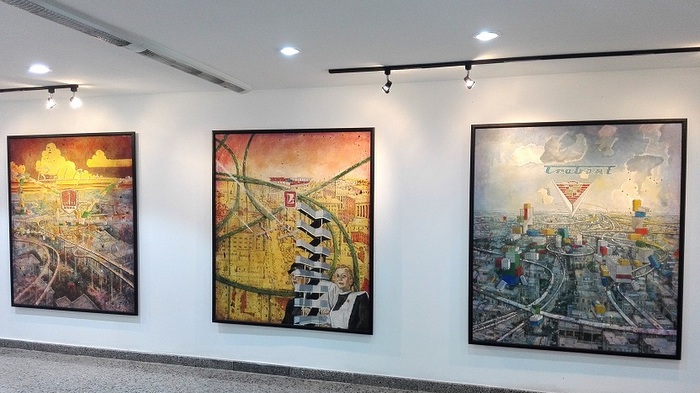 The tribute of Three Sad Tigers to Havana

Recently inaugurated in the Collage Habana Gallery, the Tres tristes tigres (Three Sad Tigers) exhibition is by its conception, very up to the purpose of the company to which it belongs, the Cuban Fund of Cultural Assets, to pay homage to the capital, in its midst millennium of existence.

With the curatorship and museography of Miriam P. Casanellas, specialist of that institution, works of three renowned representatives of contemporary Cuban art were gathered at both levels of the building: Luis Enrique Camejo, Douglas Pérez and Kelvin López; creators that among other points in common share that of having the city as a recurrent theme in their work.

As in the homonymous novel by Guillermo Cabrera Infante -also written in homage to Havana more than half a century ago-, the indisputable protagonist role of the Antillean city is given from the different corners or fragments that from it managed to awaken the inspiration of these creators. Also from the atmosphere that emerges from each painting.

Above all, in the monochromatic works of Luis Enrique Camejo (P. del Río, 1971), who has been painting urban landscapes for almost two decades, the nocturnal atmosphere of Havana that has such a preponderance in the controversial text can be made perceptible, considered by many critics the most valuable within the so-called Latin American boom.

Kelvin López (Las Tunas, 1976), meanwhile, is represented by a series of small drawings belonging to the series Archievements made many years ago, in which he incorporates, as part of the works, stamps with revolutionary slogans very popular in the 60s, period in which those dwellings of the recently emigrated bourgeoisie were nationalized, now reproduced by the artist from archival photos.

To a city of the future in which automobile brands that had a great presence in the urban fabric are superimposed, it shows us with an air of nostalgia Douglas Pérez (Cienfuegos, 1972); while in others there is a certain debt with the comic of the 50s.

Determine the time and even the author of the pieces selected for the sample, is cumbersome for the viewer little warned, since they lack chips and are intermingled. This museography also agrees with the apparently chaotic structure that Cabrera Infante gave to his narration.

But, as in the novel of the same name, in the exhibition Tres Tristes Tigres nothing is fortuitous and much less improvised. Neither the works, nor the general conception of a project that does not demerit the tribute that the FCBC proposed to do with it to Havana.

On the cover: Work by Douglas Pérez

Previous publication Gonzalo Maciel: The horizon of light Next publication ZONAMACO SUR 2020 will focus on the revision and expansion of the gender narratives in the artistic canon