A walk with jazz through the galleries of Excelencias

The magazine Arte por Excelencias no. 42 had a special presentation -together with its sisters Excelencias Turísticas del Caribe and the Americas, Excelencias del Motor and Excelencias Gourmet- in a unique place in the Cuban capital: the Jazz Café de Galerías Paseo, in El Vedado. And I say unique not only because of the environment -privileged view of the Malecón and Havana Riviera and Cohiba hotels-, but also because this is the usual place to present how much Cuban and international musician defends jazz as a manifestation of the confluence of the best of the world contemporary music.

In keeping with this, the pianist Roberto Fonseca -leader of Temperamento and one of the highest exponents of the so-called Cuban jazz- and the trumpeter and keyboardist Alberto Lescay, whose first phonogram, Escape, is commented on 42 by Joaquín Borges Triana National Prize for Cultural Journalism were present in the gathering.

But they were not the only guests of luxury this afternoon presided by the permanent correspondent in Cuba of the Excelencias Group, Jorge Ignacio Coromina Sánchez, and by the chief editor of Arte por Excelencias, Alexis Triana. Mrs. Stella Bezirtzoglou, the most excellent ambassador of Greece in Cuba, was also with us; Charalampos Babis Vorreas, president of the International Peace, Justice and Dignity to the Peoples Committee; the plastic artists Alberto Lescay and Manuel López Oliva; the designer Santos Toledo; the editor-in-chief of Excelencias del Motor, Willy Hierro Allen; among other clients, collaborators and friends of the publication.

«We love that so many diverse friends, different, meet each other at this time of the afternoon», to recover in some way what Martí did with his patriotic gatherings, amidst the din of daily combat, and talk, discuss, communicate ... ; it is very pleasant for Excelencias, and for its more than thirty-five media in six languages», stated Alexis, and it was the starting point to hear very valuable interventions that we can only summarize in limited space:

Jorge Ignacio Coromina Sánchez: «Today we wanted to do a different conversation. Generally, when we make a presentation like this, we do it with one of our products, but this afternoon is atypical, because we are going to talk about the magazine's insignia product and its three supplements and about the origins of Excelencias, a group that emerged in the year 1997, in the city of Santiago de Cuba, in the framework of the Fire Festival, and by the hand of our president, José Carlos de Santiago. Since then he has had a constant presence in our country ».

Santos Toledo: «I defended this space of the Jazz Café since its inception, because the place, at first, was designed to become a place for selling hamburgers. I proposed it as a jazz club and I was questioned a lot. I was sure that it would work, and that's how the Jazz Café came about, which will turn 20 next year. I have always defended this exquisite place, where good jazz is enjoyed in a Cuban atmosphere ».

Alberto Lescay -in the 42nd edition there is an insert of eight pages with the work of the Master and articles that speak of his last exhibition-: «The work of the Excelencias group caught our attention since it emerged in Santiago de Cuba, because we saw in its products an interest for culture, for making a high quality material, with a high level of printing. A magazine of this level must be attended. The Caguayo Foundation, which I have presided for twenty-three years, has allowed us to achieve a greater presence in Arte por Excelencias ». 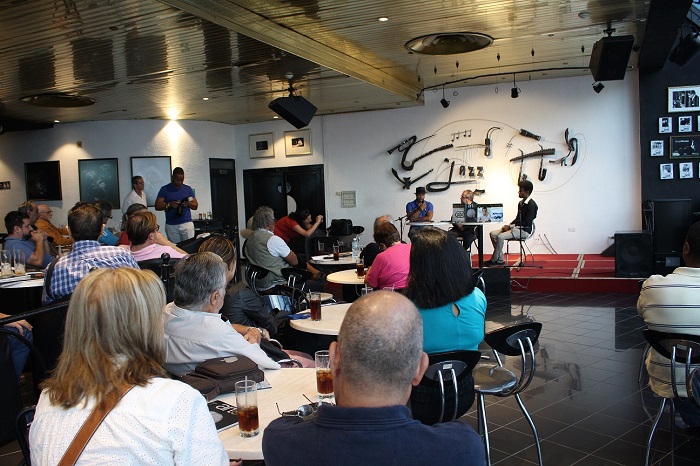 Roberto Fonseca: "I took the task of extending the Jazz Festival to Santiago de Cuba very seriously, and not for it to be independent, but rather an extension of the Havana Jazz Festival. It is not the excuse for Cubans to see international artists, but for the international artists to see everything that is done in Cuba, despite how blockaded we are and how much they want to put us in a corner. This is a country of musicians, Cuban culture is very strong, we have incredible artists. My intention is that both, those in Havana and those in Santiago, to continue to get to know each other, and create links with other artistic manifestations. "

Alberto Lescay son: "The fact of being present in this magazine that I adore -from the first numbers I've been following it- was always a dream for me, that in its pages you can show my work, share the sounds that I am generating all the time, in addition to being with such a profound criticism of Joaquín Borges Triana, with such a detailed analysis of my musical concept, of my work, is a very great privilege. My music is my passion, I love jazz and jazz musicians. I will continue doing the music that I do and defending my culture ».

Willy Hierro Allen: «The car on the cover of Excelencias del Motor looks like an ordinary car, but it is part of the first fleet of electric cars in Havana, on the inside pages there is an article that talks about it, how the Aguas de La Habana company bought this fleet, of which there are already ten rolling around the capital. They will be twenty-two, with options to complete the fifties. That means for Cuba, for the first time, to talk about a set of cars that will help to avoid environmental pollution».

Manuel López Oliva: «Sometimes art is not mechanically related to the economic flowering, which is why I constantly attack mercantilism, the disordered search for wealth. I do not defend the state of poverty frantically, but a creative artist, in a state of poverty, can do a marvelous work, and sometimes, for reasons of a certain economic mechanism, when it is in a state of monetary fullness, it begins to decay aesthetically, because the art is commercialized ».

And so that this note, which is almost an article, does not decay, I prefer to leave the reader with the desire to access our number 42, which has on its cover a beautiful photo of the dancer Viengsay Valdés made by the artist Gabriel Dávalos, who also attended to this presentation, meeting of friends who make art that ennobles and oxygenates.

Previous publication Andy Montañez now has the keys! Next publication What we owe to René Francisco