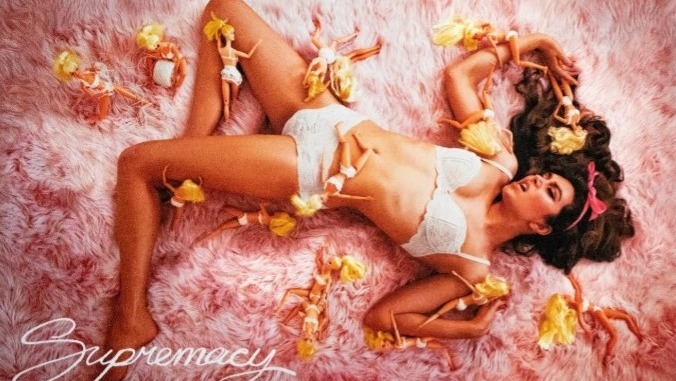 A new work by Martine Gutierrez (b. 1989, Berkeley, CA) will be the next project presented by the Whitney Museum of American Art and High Line Art on the facade of 95 Horatio Street. Supremacy (2021), a photo-performance in the artist's signature chameleonic style, presents a newly created scene in which Gutierrez poses as a model surrounded by Barbie-like dolls. The work continues the artist's investigation of how media propagates archetypes of women, beauty, and authenticity. A photograph reproduced as a 17-by-29-foot vinyl print, Supremacy will go on view on September 20, weather permitting, on the southwest corner of Gansevoort and Washington Streets, located directly across from the Whitney and the High Line.

Gutierrez works across performance, photography, and film and draws from an eclectic range of sources—from popular culture to art history—to create her imagined roles. She executes each step of the creative process herself, from staging and lighting to modeling and photography. Marcela Guerrero, Jennifer Rubio Associate Curator at the Whitney, remarked, "Gutierrez continuously challenges our understanding of identity from the intersection of gender, race, class, and beauty. In doing so from the position of subject, creator, and muse, she takes full autonomy and control of her representation."

In Supremacy, Gutierrez plays a brunette model lying on top of a saccharine pink shaggy rug. Her "broken doll" pose is reminiscent of Tyra Banks's early-aughts TV show America's Next Top Model. Blonde Barbie-like dolls, representatives of stereotypical ideals of perfection, are scattered across the model's body, echoing her lingerie and pose. One doll pulls Guiterrez's hair; another pushes her thigh. Written boldly in white, Supremacy is the brand. Gutierrez subverts the language of marketing, disclosing how supremacy replicates itself, like any other product subject to an ad campaign.