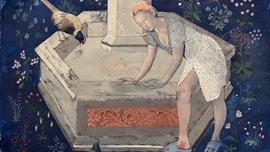 The Yusto / Giner Gallery presents the first individual exhibition of Los Bravú in its space in Marbella.

I awoke with this marble head in my hands, which tires my arms and I don't know where to leave it is the title of the exhibition with which Los Bravú (Dea Gómez and Diego Omil) present their work for the first time at the Yusto / Giner gallery, which will host this exhibition from Saturday September 18 at its main gallery space in Marbella.

For this project, Los Bravú continue to make visible in the more than ten canvases presented the axes around which their pictorial work is articulated: a return to classicism both in concept as at the compositional level. Revealing influences ranging from Greco-Roman statuary to the textile arts of the s. XVI, through primitive Italian painting and nineteenth-century oneirism in order to create their remarkable plastic language that references contemporary issues.

The writer and critic Rubén Lardín has produced the curatorial text of the exhibition, and defines the work of Los Bravú with the following words:

* “(...) It is about approaching with stealth, like accessing a clearing in the forest. Los Bravú's paintings are waking up from an imperial nap at all times, they are awakened at a gaze and, warned of our presence, they come into existence. They open themselves, fertile and new, to the glory of the morning.

The Bravú paintings smell of Byzantium, neoclassical indolence and a faun who may be thinking about how stupid those who eat grapes are, with how good the wine is. His huntress Diana has already laid down her arms and has been looted by the nymphs. They are images with the soul of a playing card, which combine the severity and polysemy of an oracle, the cosmic and the tectonic, somewhat flirtatious and somewhat magnificent paintings that, rather than novelty, would be said to be a consequence, perhaps intuition.

The Bravú are clear that beauty is, by definition, the opposite. The opposite of everything. A return. Vestiges. And that if Fra Angelico raised his head he would ask for Underworld's “Born Slippy”, for example, or maybe for more time, but a Time past. To come, but to come from then. The paintings of Los Bravú have no known age because their commitment is immemorial: to recover the mystery. "

* Fragments from the original text by Rubén Lardín

Dea Gómez (Salamanca, 1989) and Diego Omil (Pontevedra, 1988) both graduated in Fine Arts from the University of Salamanca have worked together since 2012 under the name of “Los Bravú”, a Galician word used to refer to animal smell.

In this way, they have developed a career within contemporary experimental comics where drawing, painting, sculpture and photography are interspersed.

From their residency at the Spanish Academy in Rome, they have opened new horizons, developing a multidisciplinary exhibition project that, leaving the comic aside, reflects on the traditional breakdown of the story through aesthetic and narrative resources that have emerged and are have developed within the limits of the internet. They deal with recurring themes within a generational portrait within the framework of the “millennials”. How the public image is generated within the internet, how reality is shown, manipulated or encoded in the digital space, together with a research process around the relationship between different artistic disciplines and the Internet.