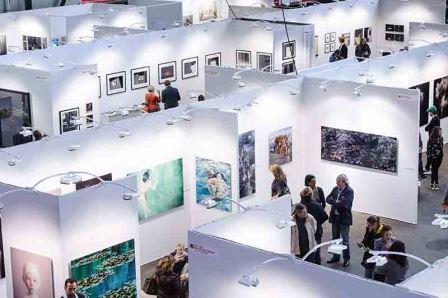 From 11 to 13 November, The Carrousel du Louvre welcomed the 5th edition of fotofever paris presenting 70 French and international galleries as well as 200 artists in the very heart of artistic Paris.

With public and critical success, fotofever paris confirms its place as the first art fair dedicated to young collectors.

The induction program ‘start to collect', the quality of welcome and the fresh and fluid scenography that were highly rewarding for the presented galleries and works, were all praised by the many visitors throughout the three days.

Particularly appreciated was “The Collector's Apartment” which welcomed visitors at the entrance of the fair and through its selection of works sparked the collectors' desire, as was the guided tour of works for beginning a collection and the displayed prices on all the walls of the exhibiting galleries.

A program of discussions initiated lively first contacts between artists and collectors on the theme of collecting.

70 French and international galleries exhibited at fotofever paris 2016: 40% were new galleries, 60% came from abroad, the majority from Europe, most notably Italy, Spain and Belgium. Elsewhere Japan is equally a country that has been very present since the creation of the fair in 2011.


Start to collect:
the introductory program to collecting by fotofever

- a focus on works less than 5,000 euros
- the Collector's Apartment – a staged selection of works situated at the entrance of the fair
- the guided tour – 10 ideal works to begin a collection
- daily discussions between artists and collectors
- the guide book – a user-guide on collecting
- ‘les p'tits collectionneurs' (the little collectors) – workshops to attune children to the creative process of photography

During ‘Le Mois de la Photo du Grand Paris' (Paris Photography Month), fotofever will unravel its start to collect program outside its walls in collaboration with a selection of Parisian galleries from 20 April to 1 May 2017.

The 6th edition of fotofever paris
will take place from 10 to 12 November 2017 at the Carrousel du Louvre, Paris.