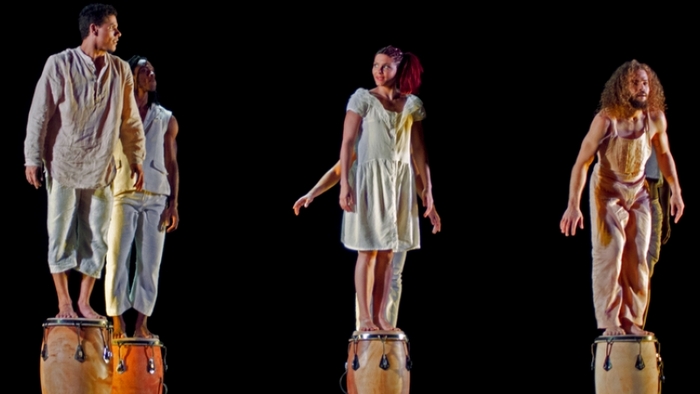 The basic preparation of dancers of Acosta Danza is a good start that allows to speculate in the choreographic creation. This is evident as soon as they come on stage at every sunset, without forgetting that group's own magnetism, inspiring and inspired, supported by the technique that they add with an unlimited energy that breaks down physical barriers.

The company directed by the dancer and choreographer Carlos Acosta, fascinated in his recent season Rituals with four works: the world premieres of Portal and COR, the premiere in Cuba of Soledad, and the replenishment of Paysage, soudain, la nuit ..., in the García Lorca Hall of the Gran Teatro de La Habana Alicia Alonso.

The renowned Cuban dancer, teacher and choreographer based in the Dominican Republic, Marianela Boán, appeared strong in the show by the hands of COR. A suggestive work that counted on the collaboration of the six performers, and whose original music, played on the stage by the pianist and composer ..., Pepe Gavilondo, (from the theme song Consuélate como yo, by Gonzalo Asencio) is the protagonist of the history.

With that personality of hers approaching the dance, always touching the everyday, through habitual gestures of the human being, the word and other resources ..., give rise to what she calls "contaminated dance", beyond pure movement. Six drums that are co-protagonists in the dance with the dancers -which make sound very good- (behind is also the hand of the percussion teacher Lino Pedroso), they contribute to the originality of the work that oozes Cubanness and maintains a perennial dialogue with the dancers moving to their rhythm. The voices of the interpreters themselves are added in COR (Zeleydi Crespo, Yanelis Godoy, Carlos L. Blanco, Mario S. Elias, Julio León and Raúl Reinoso) who contribute interesting musicality by constructing the choir - behind in that arrangement are the hands of the teacher Alina Orraca and Gavilondo himself, who also illuminates "scenic personality". Along with Bonnie Beecher's lights and Alisa Peláez's wardrobe, the piece full of effectiveness is "embroidered".

Another original premiere was Portal, by the Spanish Juanjo Arqués. As the name suggests, the concepts of the piece were placed on the edge of a door, with everything that denotes not knowing what will happen if its border is crossed ... This generates a rhythm that grows as time goes by, and as at the interpretive level as the conceptual, Portal is a major achievement in terms of resources used and a test to demonstrate the abilities of the dancers who took on the versatile vocabulary of Arqués, based on energies and made up of very diverse expressive movements. The climax appears in the final minutes, when the seven excellent dancers, dance / revolve dramatically behind the door, (the pediment of a habanera building with a stained glass window, unique and enigmatic moving element of scenographic design that hangs on one side-), that when the lights turn out - also splendid and exact of Bonnie Beecher - it reflects the tones of our national flag as an element of future ... The setting has the merit of communicating ideas perfectly through movement, in contrast with the excellent music of Ariwo, where percussion and electronic sounds are combined.

THE LONELINESS IN THE COREOGRAPHIC LANDSCAPE

The central idea of ​​Soledad, the premiere choreography in Cuba of the Spanish Rafael Bonachea -author of set design / costumes- was drawn in these presentations by the precise soundtrack (music by Astor Piazzolla, Chavela Vargas and Gidon Kremer). The work reveals the intimacy of a couple with their daily problems, and in it, the excellent dancers Laura Rodríguez / Mario S. Elías, reached, with their strong performance / dance, to touch sensitive fibers in the audience, when nuanced with their performances. aesthetic of this Catalan creator, expressed between classical and neoclassical ballet. Starting from the couple's relationship, Bonachea exploits the dramatic meaning of the movements / gestures sown in the dancers with situations and actions that they assume, accept and express as "words" that repeat themselves in waves that are increasingly full of tension and others. lyricism, while the music, full of sharpness accentuates the action. A precise delivery, in which the youthful and skillful dancers armed that scenic magic of the game of love.

Paysage, soudain, la nuit, choreography by Pontus Lidberg joined the season. The title Paisaje... made him see many more things: feelings, impressions or dreams. The musical themes suggested a nightfall. The scene, then, again permeated a colorful special with its choreographic design. In it arises that masterful synthesis of ideas that always accompany it, expressed in an uninterrupted sequence of effective theatricality, choreographic coherence, plasticity, sense of space and evocation of many arts ... Without many choreographic pretensions, ideal soundtrack, a design of lights captivating (Karen Young), and a minimal and ideal scenography created by the Cuban artist Elizabet Cerviño (a güines installation) "sown" deep in the scene, Paysage ..., talked with the Cuban from the rhythm, the gesture, the dance and the action, drawn by the company.

Previous publication Repercussion and the National Symphony: what you could not miss Next publication The Botí Foundation approaches to migrations in ARCO