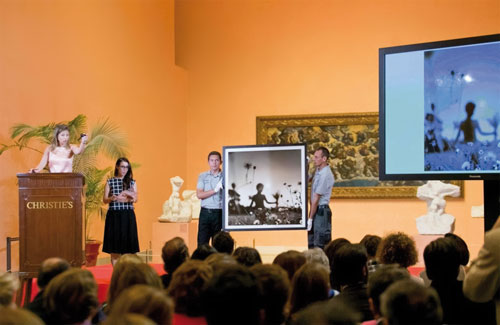 The Cuban Aroma of Christie's

The Christ painting was hanging on the wall as if Leonardo Da Vinci had just painted it. Those present at Christie's watched it anxiously. Some wanted to know who would purchase the canvas, which was first sold in 1958 at an auction held in London for 60 U.S. dollars. Half a century later, it came to light again in New Orleans, in 2005.

Many followed by phone the peculiar bidding war.

— Ladies and gentlemen: we move now to Leonardo Da Vinci’s Salvator Mundi, the masterpiece of Cristo Salvador (Christ the Savior of the World), which previously belonged to the three kings of England, with a value of 90 million, says the auctioneer and the expectant look in his eyes betrays him.

— 110 million U.S. dollars, another interested person proposes with the hand raised, in a crowd where you only see people in suits.

The work of the Italian artist became, on November 15th, 2017, the most expensive painting in history, sold at an auction worth 450 million U.S. dollars. Christie’s (Christie's Auction & Private Sales) was responsible for such milestone.

— "Thank you all for your bids on Leonardo Da Vinci’s Salvator Mundi. The painting is sold! The auctioneer stated as if he had won the Battle of Lepanto.

Founded in 1766, in London, England, Christie's offers over 350 sales annually in over 80 categories, including all areas of fine and decorative arts, jewelry, photography, winery and other luxury items, which have boosted its reputation of holding the most famous auctions since the 20th century.

Its founder, James Christie, gained reputation among the British auction houses back then, in an environment marked by the development of art trades in the years after the French Revolution. Its prestige kept it alive all these years up to 1999, when it became fully owned by French Francois Pinault’s Artemis Group. In 2014, Patricia Barbizet — regarded by Fortune magazine as one of the 50 wealthiest women in the world — became the chairwoman of the famed entity.

This brand has exhibited and sold in its ten auction rooms, works and personal belongings of outstanding creators and personalities like Vincent Van Gogh, Pablo Picasso, Leonardo Da Vinci, Rembrandt, Napoleon Bonaparte, Yves Saint Laurent and Diana of Wales, as well as other works regarded as World’s Cultural Heritage.

One of his most recognized achievements occurred in the parent company of New York, which auctioned, in 2010, Pablo Picasso’s painting, Desnudo, hojas verdes y busto (Nude, Green Leaves and Bust) for 106.482.500 U.S. dollars, the highest price paid in auction at the time.

This record was followed, in 2015, by the auction of Les Femmes d'Alger, by the icon of cubism, worth 179.4 million U.S. dollars, and the aforementioned canvas Salvator Mundi, by Leonardo Da Vinci.

The auction house, in addition to becoming a leading spot in the art market worldwide, has a broad educational platform, known as "Christie's education". Accredited by the Glasgow University, UK, and the State Board of Regents in U.S., it has colleges both in the city of London and in New York. These educational networks extend to higher levels in masters, postgraduate diplomas, business art certificates and courses related to art from different regions of the world and historical era: European art (Antiquity, Middle Age, and the Renaissance), Arts of China, Style and Design (from the Renaissance to Modernity), Modern and Contemporary Art and History of the art market.

Christie’s also expanded in 2015 with the acquisition of the luxury real estate company Great Estates, which is named Christie’s International Real Estate since 2011. It has a wide network of affiliates and offices in the U.S., Europe, Africa, Asia, and Oceania.

Although both are geographically distant from each other, there are magical threads linking Christie’s auction house with Cuba and its artistic production. Works of renowned plastic artists from Cuba have been exhibited and sold in their rooms. In 2016, it sold almost 300 lots of Cuban pieces and raised 22.76 million U.S. dollars, one of its greatest figures for Latin American art.

Seven Cuban artists have achieved record prices in auction for their works, six modernists and one contemporary, among them, Mariano Rodríguez's Pelea de Gallos (Cockfight), sold for 1.08 million U.S. dollars. Others joining the list are Esterio Segura, Fidelio Ponce de León, Carlos Enríquez, René Portocarrero, Roberto Fabelo, Víctor Manuel, and Domingo Ramos. To this collection is added Sur les traces or Transformation, by Wifredo Lam, considered the greatest jewel of the auction and shows the impact of surrealism mixed with Afro-Cuban culture.

But the connections with the Greatest of the Antilles go beyond paintings as new aromas emerge, especially that coming from the famous tobacco plantations. The long aging Habano is another linking element. The offer of this type of tobacco is promoted by Christie’s and other entities within the same industry, which have generated a real vintage cigar market. The specialists affirm that a fifty years-old Habano can give us a bouquet of unique aromas and tastes.

Besides, the prestigious auction house will arrive in the Caribbean Island thanks to the presence of two experienced professionals, Dalia Padilla and María Eugenia Álvarez, who will be responsible for the famous auction of five humidors belonging to the brands Cohiba, Montecristo, Romeo y Julieta, Partagás, and H Upmann, which will be held during the gala night at the 22nd edition of the Habano Festival — worth noting that this event raised last year more than 1.5 million Euros that were allocated to Cuban public health. Christie's will add another touch of class, which levitates in the air as the fiery and fragrant fumes of the most prestigious tobacco market in the world.

The Art of a Good Auction

Talk about an auction and that attention is immediately riveted on the objects for which you are going to bid, on those interested in those pieces or on the extraordinary power and adrenaline generated by the act of competing for something that will go under the gavel. Not infrequently, the auctioneer's performance is overshadowed. But it is that figure, serene in its behavior, certain in its procedure; the one that leads, like a sharp emcee, a trepidante spectacle whose rhythm is marked by the firm pulse and the dry thump of the gavel.

In the act of an auctioneer, there is a lot of tactics, intuition and skills. There must be as much preparation, elegance and ability to maintain control and connection. These are some of the essential keys required to successfully managing such a singular event, in which the auctioneer is undoubtedly also the star of the show.

That is well known for Dalia Padilla and María Eugenia Alvarez, specialists of Christie's and recognized as one of the most famous and prestigious auction houses of the world. They will be tasked with taking control of the humidor auction during the 22nd edition of the Habano Festival, a moment for which they will be able to practice all their experience, talent and special connection skills, since both started at the same time at Christie's and all the auctions they have held have made them together.

Regarding their participation in the Festival, which will surely be part of the unforgettable moments that both have lived in their careers, they say they feel very excited about it. "We will do everything we can to make the auction a success. The bar is quite high, as the people who came before us as auctioneers got spectacular bids. We want to reach their brands and surpass them, if possible," say the experienced women, who will have under their the gavel the sale of five fabulous humidors from the Cohiba, Montecristo, Romeo and Julieta, Partagás and H. Upmann brands.

How would you rate the opportunity to participate in such an important Habano Festival auction, especially as it is a charity fundraiser in which all the money is destined for Cuban Public Health?

It is an honor for us to be able to help this charitable cause and be part of this important Festival. We know that the auction of humidors is a very important element of the event. We could almost say that it is its grand finale, and the bigger and the more spectacular as it gets, the better.

What is the main difference when it comes to an auction of humidors? Is there a different way to proceed for each object or piece?

Humidors are unique pieces of art, comparable to any sculpture or painting, so we will proceed to auction them off in the same way, although we assume that the atmosphere will be more festive and relaxed than in one of our auctions.

The universe woven around the best tobacco in the world can be very exciting. What enthralls you the most about them?

It's very difficult to choose, because everything seduces us: the context, the originality of the event, Havana...

From your profession and experience, what elements tell this auction apart from others?

The quality of the pieces to be auctioned, their exclusivity, the special atmosphere in which the bidding will take place and the passion of the participants.

What are the secrets to become a good auctioneer? What can't be missing in an auctioneer's performance?

A good auctioneer has to draw the attention of the public, pique the emergence of bids with elegance, in short, create an atmosphere of content spectacle. The auction of humidors at the Habano Festival has excellent conditions to do just that. It will unfold in a larger room than usual, but that's more interesting.

Cristhie's is no doubt one of the most prestigious auction houses in the world. How demanding is it to represent such a famous institution?

Christie's was founded in 1766, so we're talking about more than 250 years of history. It has held the most important auctions in history. It has 53 offices in 32 different countries and a dozen sale rooms all over the world (one in London, plus a room in Paris, New York, Milan, Geneva, Dubai, Amsterdam, Zurich, Mumbai, Shanghai and Hong Kong apiece).

Its prestige is not only based on the auction of paintings signed by the greatest artists in the history of art. Christie's sales are divided into more than 80 categories, including everything related to fine arts, decorative arts, photography, jewelry, wine bottles, personal objects, and the more historical articles of collection... among many other things worth going under the gavel.

So working for Christie's is a responsibility, but also a source of pride.

We will do everything in our power to make the event live up to expectations, both of the organization that provides valuable pieces for auction, and of the company we represent.

We are all aware of the difficult work of an auctioneer, but really, how much responsibility falls on an auctioneer when it comes to getting the best sale?

When auctions are easy and there are customers bidding over lots, there is no problem. As we commented, the really difficult thing is to know how to read the faces of the undecided and start off good bids on all lots, not only those that arouse the most interest. We want to get a good result from the whole set.

It is known that in auctions there are lots that arouse higher expectations than the rest, but there are great moments when surprise arises over other lots that are brought up. That's why, although the clients are the ones who have the last say, the auctioneer, in addition to leading the event, has to have a bit of psychology so that everything goes as smooth as possible.