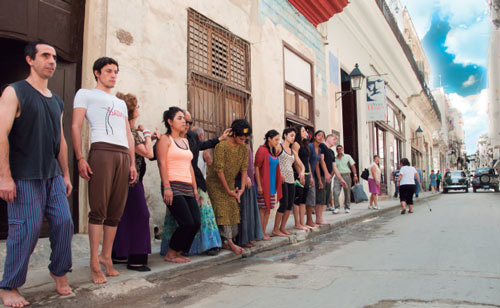 Like every year, since 1996, in the Historic Downtown District of Havana, declared a World Heritage Site by UNESCO since 1982, the “Danza Teatro Retazos” company, the Office of the City´s Historian (OHCH), and the Ministry of Culture, with the support of the “Centro de Teatro” of the Cuban capital, organize this dance event that contributes to the enrichment of the cultural heritage of the inhabitants of the city, as well as temporary visitors who visit and admire it.

Its basic purpose is to promote dance. Named “Habana Vieja: Ciudad en Movimiento” (Old Havana: a city in motion,) it could be described as different and unusual. It is about bringing the audience closer to a combination of artistic manifestations inspired by local and national history, architecture and artistic design of one of the most beautiful urban enclaves in the world. It allows covering a wide range of trends and artistic manifestations, exhibitions and concerts, video art presentations and other performing activities with the incorporation of young talents. It provides professional development through courses, workshops, conferences and audiovisual materials as part of a diverse collateral program.