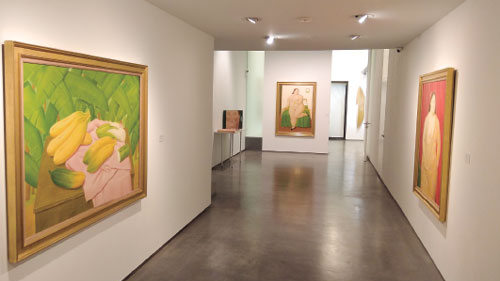 Although it seems unprecedented, it is the first time that the work of Colombian painter, sculptor and draftsman Fernando Botero (Medellín, 1932) is presented in Barcelona, specifically in the Marlborough gallery that opened its doors in 2006, adding to the other six venues that the gallery London has in the world. For this reason, the monographic exhibition Pinturas recientes (Recent Paintings) is a milestone for the Barcelona public.

Botero is considered one of the best Latin American artists. In more than six decades dedicated to the world of art, his work is recognized throughout the world, since its unmistakable style makes it easily identifiable at first sight. The sinuous forms, filled, enlarged, robust, thick and sometimes deformed, are perfectly recognizable. And, in spite of the fact that the human beings and animals that appear in his paintings and sculptures have exaggeratedly rounded volumes, to the eyes of the spectator the existence is observed in a very unique way of humor and sarcastic criticism, regardless of the grotesque images shown by their disproportionate characters, whether they are anonymous or famous, in which they see an ugliness that even makes them be nice.