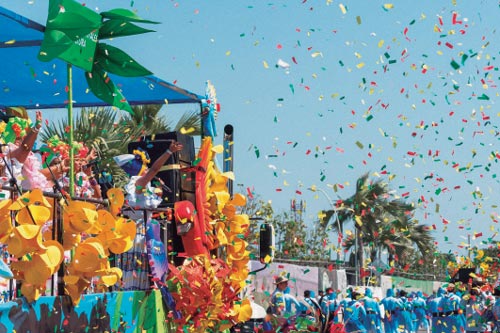 A festival that preserves heritage

When it comes to parties, Colombia stands out for its celebrations. One of the best known is the Carnival of Barranquilla, declared by the Senate of the Republic in 2002 “Cultural Heritage of the Nation” and later, in November 2003, “Oral and Intangible Cultural Heritage of Humanity” by UNESCO.

This party was adopted as a celebration of the Spanish colony, and the idiosyncrasy of the “costeño” gave the celebration a picaresque and fun touch. The Barranquilla Carnival is a representation of folklore and a traditional, contemporary and modern cultural manifestation, adapting its characters to the social and political reality of the country.

In the traditional dances, men couples who parade during the journey wear bright garments with sequins ornaments, combs and lace. They mix a great variety and brightness in the costumes, and make this festival a celebration of colors, aromas and shapes. The men wear trousers with patches on the knees in the shape of a cup and breastplates decorated with figures of animals. The women make their presence felt with joy, beauty and splendid costumes to the rhythm of the music that is heard throughout the tour.