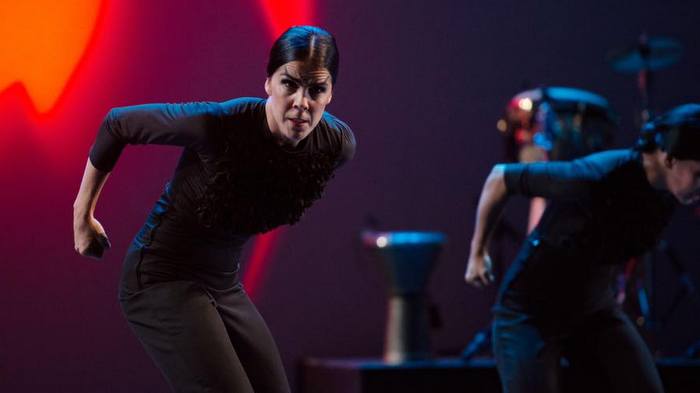 Irene Rodríguez at Jacob´s Pillow: come and go in time

The always flaming Irene Rodríguez makes it clear - every time she goes on stage - that the best resource to achieve success will always be to revisit the past and thus "dream the future", as the poet wrote that Cuba still cries. The formula (unfortunate for some) has given Rodriguez such a force that already the most demanding critics of various countries of the world, have set their sights on the Cuban every time she takes to the scenes a premiere.

The formula, yes, full of magic, exists and is very risky: come and go in time. They say she has seen the Spanish divas move their hands, feel flamenco in a supernatural way. In that gypsy transportation, Rodriguez saw Pastora Imperio, knelt before Lola, praised the musicality of Manolo Caracol and cried with Camarón. This privilege is given only to those who are seriously committed to art and no matter the age, the color of the skin, or the country ...

These days, news of her participation in the Jacob’s Pillow reaffirms the quality of the dancer and director. Of these presentations it has been said:

“She has found a unique way to make flamenco feel alive and contemporary while staying true to its roots. Piece after piece, the Irene Rodríguez Company exceeded the limits of flamenco and presented a series of outstanding works that culminated in an exciting solo by Irene, one of the most exciting flamenco dancers currently working. »Ken Ross. MASSLIVE

They emphasize that the range of works that serve as source material for the different pieces covers a wide range. One of the choreographies finely elaborated by Rodriguez is inspired by the iconic painting El Grito by Edward Munch, also abundant in warm background colors, semi-dark light and where a figure screams in despair. An example of how the Cuban creator develops the ability to find inspiration in a dazzling painting that acquired the status of a cultural icon after World War II. She was also attracted to the poem Romance de la Pena Negra by Federico García Lorca, an essential being of Hispanic art.

Another of her favorite pieces in the program is based on bullfighting. On this, Ken Ross of MASSLIVE stated:

«It might sound cliché for a flamenco group, but the dancers really made this ingenious idea work throughout the piece. The women dressed in black pretended to be carrying bulls, arms outstretched in the air as they stomped on their feet like bulls kicking dirt before going to kill. Yohan Garcia was outstanding as much as the killer. »

The other dancers of the company stand out for power and precision from the beginning to the end. At the same time, the contribution of live musicians is decisive and motivates dancers, taking them to greater heights. In particular, singer Andrés Correa and guitarist Reynier Llorente stood out for their spectacular skill and virtuosity. In the case of Correa, he gave a chilling solo performance when he sang while walking among the audience towards the stage.

And says Ken Ross of MASSLIVE, participant in the show starring Irene during the Jacob’s Pillow:

«After several cheers, the entire dance company and the musicians made a long repetition that caused the crowd to stand up again. An exceptional end to an incredible night. »

Other critics and journalists from the world will write again about the young diva, as Brian Schaefer of the New York Times did, who said that "her company offers a very different view of contemporary Cuban culture" and that she is a young dancer, talented and determined. "or Carolyn and Eli Newberger who assured that« The Irene Rodríguez Company extended flamenco from its roots to the diaspora and into the future, with theatrical and imaginative performances, mixing the flamenco style with integrated choreographies, the saxophone extending the musical line, the castanets clicking, the fans opening and closing with precision, projected images, smoke, dazzling costumes and spins of stars for Mrs. Rodriguez, an extraordinary dancer who does magic on her heels, pointed and amazing inventions. »

At the same time, the prestigious To the Pointe site said “Can a dance company exist solely from the star power of its leader? In the case of the Irene Rodríguez Company, the answer is yes. Rodriguez is the fire. The way she throws her fringed shawl or hits the pounding beats of her fingertips is hypnotic. She is a force of nature. »

We can also cite the criteria of Charles Giuliano of Berkshire Fine Arts who says that “Her approach evolves from the vernacular to the stage of a concert. The elements are transformed through her extensive experience in ballet and modern dance. "And concludes" The audience was completely satisfied. We hope to see more of this extraordinary company in the coming years. »

Meanwhile, she, from Cuba and with the members of her Company, has already become a powerful creative force that few can face.