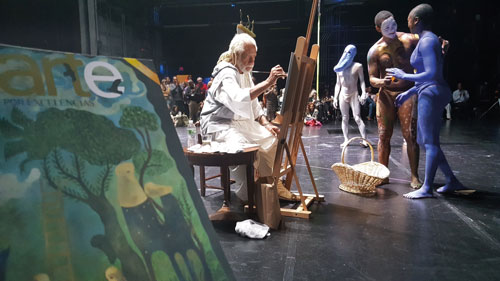 Arte por Excelencias is about to reach a whole decade of intense existence. In January 2008, we were a bunch of perseverant dreamers, as much as we are today as we now lay our hands on this robus 40th issue. Just now, Arte 38 magazine has just made the rounds at the Kennedy Center in Washington DC, where its copies were distributed at the Festival Artes de Cuba. This may be evidenced in the image that speaks for itself in the section La Penúltima, when maestro Manuel Mendive made, before almost two hundred Americans, his performance and our magazine was passed on from hand to hand, celebrating his work on the cover page.

In turn, BusBoys and Poets, the thriving chain of restaurants that operates in the U.S. capital -with cultural centers that boast bookstores and stages- hosted the launch and the podcasting of issue 39 on Facebook Live. This virtually makes this presentation of our magazine the most viewed ever by our readers. Our pages on Arte por Excelencias website has already posted record highs in visits on such short notice. You can check it yourself at arteporexcelencias.com or live on the Arte por Excelencias Facebook page @AxEOnline.

It could be pure metaphysics or speculation, but it is funny to find that numerology says that when 0 is combined with another number, its potential is amplified. And that «number 40 is a series of strong opinions and beliefs, about what is fair and necessary, that sometimes may seem obstinate to others, but it is because they need time to review and think about things...» Or that «the emphasis of the number 40 is always on patience, because it is the final number of system, order and management. Likewise, I am surprised that the argument is that its vibrations are the powers to create and achieve goals». It seems a definition of where our persevering production team has arrived, and how far we will go on restlessly.

In all fairness, our strength and luck do not consist in sitting down on our hands to see what fate had in store for us. With the early issues of this magazine in our hands, we landed on Art Basel to interview its former head curator and on both our two feet get to the chamber where Gary Nader made his fledging museum of Latin American art be born and strive. And ever since, we have not ever stopped putting up stands in ArtBo and in Zona Maco; and to tour around Arco Madrid, Pinta Miami and count on contributing writers from Buenos Aires to Hong Kong, let alone the systematic dispatch of copies to both artists and galleries, collectors and culture-and-art-related businesspeople who help us, with their trust and investment on us, to continue standing up for a promotional platform for all Iberian-America and the Caribbean.

I was just thinking of this when I saw our latest issue of magazine Arte por Excelencias in Omara Portuondo’s hands, La Novia de Cuba, right at the moment when Havana´s Historian Eusebio Leal would talk, in La Covacha restaurant, about her capacity to create, «someone who gives herself with the passion and strength of her next eighty-eight years, as if it were the first and the last day; someone who has reaped so much glory that she may probably not even realize».

All of us from Excelencias were overjoyed when we had the good fortune and the privilege of seeing her singing for us: majestic at the microphone while the great Frank Fernandez accompanied her on the piano. May our Arte por Excelencias have the life and passion of these great founders of the art and culture of our peoples! With the strength of issue 40, that is our commitment.