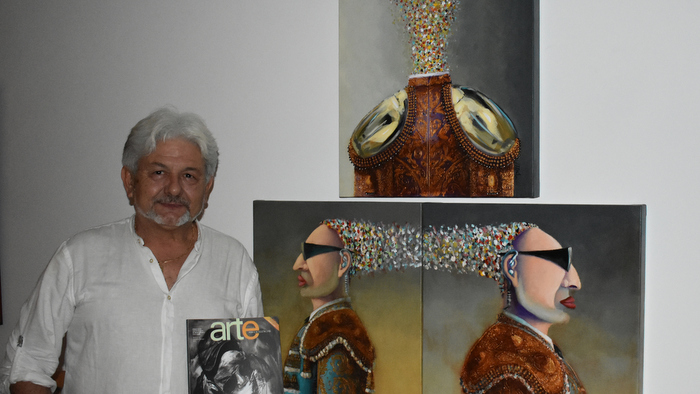 The Art Unity gallery, in La Zubia (Granada), has opened this weekend the new artistic season with Minotaurs, a sample of sculptures and paintings by Andalusian creators Félix Martín and Pedro Molina.

The works of both artists - the two self-taught, one was a cook and the other, a primary school teacher -, revolve around the bullfighting world. The first carves in wood and bronze the figure of this animal so important in Spanish culture, while the second portrays in his paintings sui generis characters who always wear a light suit like those used by bullfighters.

Molina (Andújar, Jaén, 1958) also makes metal bulls, and draws them - like those we saw recently at the Art Marbella modern and contemporary art fair - but this exhibition focuses only on his paintings because, as the artist had already confessed: “although they seem related, I never mix the light suit with the bull. They are different concepts. I love the bull as an animal, it is a beautiful animal and I use the suit as a metaphor: it is a fighting suit”.

Pedro is an old acquaintance of Art Unity: he is the author of the famous “kidnapped” painting several years ago and reissued a few months ago for Willy's joy… In addition, since Art Marbella 2018, he is one of the artists who, yes or yes, had to exhibit in this space of arts, located in an urbanization on the outskirts of La Zubia.

Finally, this September he does it with Félix Martín, with whom he has made a perfect symbiosis: the sculptures of one in front of the paintings of the other complement a bullfighting discourse that today is often controversial, but which is linked to being Spanish, to feel Spanish and to the roots of a country with centuries of history.

Before the inauguration, Pedro Molina assures Arte por Excelencias that he is “very happy. A friendship with this space is already being forged. In addition, people ask a lot and I love that confidence that you don't normally have in other types of exhibitions. The mixture of my paintings with Felix's sculptures is magically complemented. The walls speak… and horned, because it is a space that is alive”.

His Minotaur-Change of third is a new collection of a year and a means of work. And Art Unity is the first place where it is shown completely: “What I bring is recent, but there are also some works that I had at home that had to be. There are some people who know my career and have seen that picture is twenty years ago and which one is freshly made. The link between them is the suit of lights, which, as you know, is my war suit to fight life”.

From the kitchen to the workshop

As a chef, Félix Martín began to create his first works in the kitchen of a large hotel. They were ephemeral sculptures carved in margarine or wax, which when they closed the buffet disappeared. Then he began experimenting with other materials, such as wood ...

"I can't explain my style," confesses this flat man who is also a fancier and writer. “I drank from Henry Moore, for example, a sculptor that I have always liked. I like Picasso too. Everything you like always has something left. It is learned, that is the trade. I have 200 pieces… You start doing an amorphous thing, which makes no sense and little by little you refine it until you get to it…”

Felix has told us that he likes Picasso, but seeing his bulls one realizes that the influence of the genius from Malaga goes beyond. There are features and cubist forms in these animals, in their contours (also paints guitars, pigeons, women's bodies ...); in fact, his work reminds us of one of the simplest works treasured by the Picasso Malaga Museum: a sculpture made with the saddle and the handle of a bicycle (Cabeza de toro, 1942).

Perhaps that is why his empathy with the cubist painter and sculptor Willy LP and Nataliya Riesen - owners of Art Unity - was immediate. The Ukrainian gallery owner confirms this to us: “We are very happy with this exhibition, because we really like Pedro's paintings and Felix's sculptures. People always ask us what criteria we have to choose the artists and the exhibitions we do, and the most important criterion we have is that we must be in love with the works”.

As is traditional in this "arts space", the openings have more than pieces for sale, so the Pérez brothers played the guitar, sang and recited poems ... some guests danced Sevillanas ... and there was a tasting of the fantastic wines of the Rioja Vivanco winery - owner, in addition, of an important art museum linked to the culture of this ancestral drink.

Also, the number 47 of our magazine Arte por Excelencias was presented, which as always, had a very good reception among the artists and gallery owners present. In this edition, besides the usual walk around the art fair of the world, there is a work on the fifth anniversary of Art Unity, which Willy and Nataliya especially thanked.

On the cover: The painter Pedro Molina and his Minotaurs