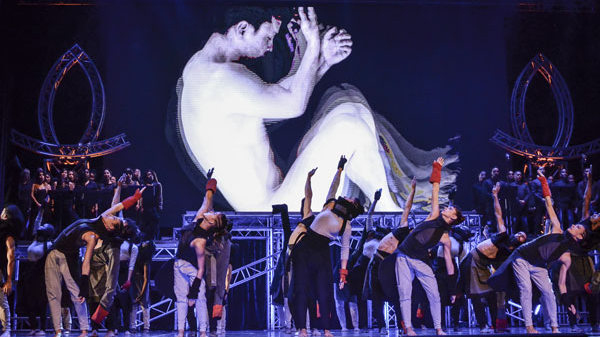 Danza Contemporánea de Cuba has premiered -a theater full of the six performances at the Gran Teatro de La Habana "Alicia Alonso" -, its new super production " Réquiem ", on the exalted masterpiece of W.A. Mozart, with the inestimable collaboration of the Lyric Theater Nacional (choir of 30 voices and four outstanding soloists) and the Symphonic Orchestra of the Gran Teatro de la Habana (following the instrumental scheme of the late 18th century, for which it was composed).

The staging corresponded to Miguel Iglesias (general director of Contemporary Dance of Cuba for more than three decades) and the musical direction to the maestro Giovanni Duarte (owner of the orchestra and general director of the National Lyrical Theater of Cuba); the choreography, inspired by the Latin texts of the Catholic liturgy, is due to George Céspedes, who offers us a contemporary vision of the last work composed by Mozart (completed by his disciple FX Sussmayr) with motivated movements over the course of the seven blocks in which the musical piece is divided, whose dancers interact with the soloists and the choir, to show us the expressive power and the beauty of this score, destined to the religious services by the death of an exalted personality.

According to the hand program, the creators have produced "a theatrical concert in honor of those who perish every minute on the planet, a concert in honor of life, a show to raise awareness of humanity in these moments of the world, through the most beautiful, dramatic and revealing music that has ever been conceived ... ".

The special effects that were projected on a transparent screen like cyclorama showed, according to the passages of the liturgical text, images of our planet rotating in the Milky Way; a naked human being in a fetal position floating in outer space; telluric explosions; troops in war actions; the bad treatment of our "common house"; other polluting acts of our atmosphere.

The choreographic writing is identified with other previous works of Céspedes -such as his "Carmina Burana" - particularly in the stage design of the group sections, always punctuated with a postmodern, random eclecticism, however with rigor in the mathematical combinations. In our opinion, the performance of the choreography triumphs in the most dramatic sections involving duos (straight or same sex), trios of indistinct combinations (one girl and two boys or vice versa), quartets (with different generic combinations), as well as alone, by dancers of both sexes, all exhibiting the portentous projection of their muscular dynamics, acquired in their rigorous performative training.

The vocal parts offered a delivery of high calibers, both the stellar soprano Milagros de los Ángeles, as well as the male voices, especially the countertenor Frank Ledesma and the bass Marcos Lima, for their interpretative gifts and for the clear diction appreciated in two of the performances that this chronicler could attend. The orchestra of the theater -in the pit- and the choir on the ad hoc illuminated platforms (divided the female and male voices in separate laterals) achieved an unsuspected natural equalization -with the expertise of its director Denise Falcón-, if we take into account the limited resources in terms of amplification equipment.

Other elements with essential performances in a production of this type are the costumes and the design of lights. The first, conceived by Paula Fernández, had happy moments in the final sequences, and Fernando Alonso Couzo demonstrated his technological skills in the second element, always with unexpected avatars at certain moments.

In short, the resounding response of the respectable public for several minutes standing, attested to the artistic triumph of this new scenic challenge of DCC. This confirms the success achieved in the Mexican capital, with the absolute premiere of this Cuban project last November.

The great mystery of Mozart's music is that even in his most tragic compositions, the most voluptuous sensuality is never absent. (Céspedes knew how to understand).

The genius of Salzburg had a perception of death (as can be seen in his last letter to the father), which reveals a deep thought about “the inextricable link between beauty and death." His music has shown and demonstrated in the most powerful way”.

In this show the Masonic ideals and Mozart's conversion are justified. The composer of the Réquiem, residing in Vienna, is lost and gone astray after the death of his Pygmalion and progenitor, he could not control the course of events. He was fortunate in his childhood as a prodigy child, instead he was unfortunate in his wandering condition of prodigal son.

Mozart embraced noble Gnostic convictions when he converted to Freemasonry. This is an important point to understand the last years of Mozart, and to understand the exalted music that he then produced, of marked difference with all his previous production.

Mozart gave to mundane things an always humorous and sarcastic treatment, always a comic record, except when the grave, terrible and desired presence of Sister Death, with its promise of "eternal light" and "eternal rest" ensued. ", that visits a loved one (...). The Salzburg composer impregnated all his music with that impressive duplicity of comic conscience and tragic consciousness (ritualized and hieratic) at the end of his life, in his masonic pieces, as in the Misa de Réquiem.

Source: The Song of the Sirens, by the Spanish musicologist Eugenio Trías. Ed. Guttemberg, 2007.

On the cover: Photo by Adolfo Izquierdo / took from Cubarte