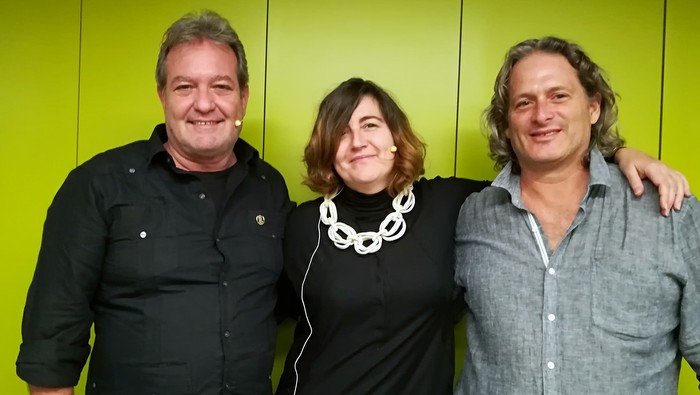 FICGibara: We want it to remain an exceptional experience

A new edition of the Gibara International Film Festival arrives in Barcelona and Arte por Excelencias approaches the architects of this multicultural party. Jorge Perugorría, Jorge Benvenuto and Marta Nin leave their impressions for our readers.

Jorge Perugorría: "We want the Gibara Film Festival to remain an exceptional experience"

The headquarters of Casa América de Catalunya serves as a meeting point with Jorge Perugorría, (Pichi), current director of the Gibara Film Festival. We do not miss the opportunity to address him and discuss his presence in this city and the perspectives of the event it leads.

Jorge, what connection does Casa América have with Gibara at this moment and with that Festival that we know has cost so much to overcome?

What we are trying to do is to resume a link and a working relationship that existed - Sergio Benvenuto had established it - with Casa América and with Marta Nin Camps, its director. We are trying to recover that space through Sergio's management and I think it is important for us as a Festival to have a presence here in Barcelona. I think there is a very close cultural and historical link between Gibara and Barcelona because many of the merchants who arrived and founded Gibara were Catalan.

I think that this festival has been important for the people of Gibara, it has greatly influenced both the city and them, for whom Humberto Solás - creator of the Festival - is a kind of Christopher Columbus, who rediscovered Gibara. All Cubans, and Gibareños in particular, do not forget it, and have a relationship with this very beautiful festival. I believe that this relationship with Barcelona will underpin that project.

This year there have also been a number of very important filmmakers at the Festival, such as Fernando Pérez, do you think that link between Cuban directors and the Gibara Festival should be maintained?

Yes, I even think that this year the experience we had with the presence of directors, producers, Cuban actors has been wonderful: the people who make films in Cuba. The festival served as a framework for that meeting between the direction of the Cuban Institute of Cinematographic Art and Industry and the filmmakers and there was a very interesting dialogue regarding the new decree that will give a legal framework to the Cuban independent cinema, which has been in existence for more than 20 years. Gibara served as the stage for that meeting and we are very happy. We want that to be maintained: that Gibara becomes a space where filmmakers can meet again, talk about projects, talk about Cuban cinema, about the needs of Cuban cinema in terms of production, in terms of distribution, of the things that have to be done and that we owe ourselves, and that it is within that wonderful framework that is the multicultural festival and, as the cinema covers all the arts, it is a very special moment. We don't want this meeting of Cuban filmmakers only during the week of the festival: we are finishing building the Festival House where we want the presence of filmmakers throughout the year to give workshops of screenwriting, photography, production, direction. That is why the presence of Cuban filmmakers in Gibara seems fundamental to us.

I think that idea is phenomenal, I wish it could be very soon. Give me a brushstroke of what the Gibara Festival will be this year ...

We want Gibara to continue to be an exceptional experience, not only for the Gibareños but also for all the people who visit Gibara during the Festival; We want to continue influencing the growth of Gibara, to continue developing issues such as gender, environment, entrepreneurship and new technologies ... All that to give tools to the Gibareños, not only cultural, not only for everything that can give the influence of art in a locality, but also to offer tools to the Gibareños so that they can realize their dream in Gibara, because many people have left Gibara and what we want is for people to begin to realize their own dreams in Gibara: give tools to young people and link them to the same growth that one begins to notice within the city.

Marta Nin: “The Gibara Film Festival is a black pearl”

Marta, we know that, at the beginning of the Gibara Film Festival and for a long time, there was a collaboration with Casa América, what is your vision at this time of the Film Festival and what links are you going to have from this year with Gibara?

I am tremendously happy to have Jorge Perugorría here with us, Sergio Benvenuto, to have the Gibara Festival in Barcelona again. I knew the project of the previous festival because Humberto Solás was invited to a retrospective that was made of his cinema in Barcelona, ​​and I remember that Humberto, rather than talking to me about his films, was telling me about his creation, about that little boy who was putting together in Gibara and, he told me so much about that festival, that I really wanted to meet him and I met him.

Now I do not know the project that is being carried out, but I have seen some video capsules and I have been absolutely fascinated of what has been done in Gibara. The times I had a relationship with the Festival I saw a city absolutely passionate about that idea and with a very Cuban tenacity in raising that "hard and mature". I do not know it personally - I really want to live it - but in the videos I have seen I have found an absolutely fabulous revolution, in which the same population is dedicated, imbued and taken by the cinema but from a very, very professional vision that takes the Festival to a very high standard. And I really want to enjoy it.

For us, what is the Gibara Festival? We are an eminently cultural institution, that we work to build bridges of relationship between Latin America and Catalonia and we fervently believe, that culture is a tool of social development - economic as well - but of social and humanity empowerment, very important and that we cannot let it lose.

For me the Gibara Film Festival is a black pearl, in other words, it is an example that everyone can understand and can live on how culture can change the reality of a city so small and so deteriorated by the passage of Hurricane Ike as was Gibara. A city in the East, which had its splendor, that had its glorious moment but that there was as numb, as a sleeping beauty. Suddenly the cinema comes and changes the whole reality of the people who live there and from what we have talked to Pichi now, it becomes a focus of attraction for young Cubans from other places.

Yes, for the international level, it is fascinating, but it seems very nutritious for a country that looks at each other. That suddenly people from other places on the island want to go to Holguín - with how difficult it is to get there - to Gibara, with what it can mean. I think that is very, very important and demonstrates how from a tool like cinema, which is sometimes done just for us to enjoy, so many things can be changed. So, I am very happy to have woven these complicities to be able to bring here again the Gibara Festival, to Barcelona, ​​and not only at the headquarters of Casa América, but we will also take it to the film library, we will take it to Cinemes Girona to take them to different audiences in the city.

Sergio Benvenuto: "We are projecting an equally successful FIG 2020"

Sergio, welcome to Barcelona, ​​which is almost your city ...

Yes, really. We didn't do this festival for 10 years, so we're very happy.

What do you think about the link recovered with Marta Nin, with Casa América, with the Gibara Film Festival?

I know it has cost a lot - for several years - and it has been thanks to the push of many people who are achieving what Humberto would have been very excited about ...

I think so. First because Humberto, as he did in his films, was not repeated and would not have been repeated with the Festival; second, because the Festival preserves the founding heritage, and third, because this FIC Gibara of the year 2019 is a very serious, very solid festival and of which I am quite proud and proud to be part of it.

This year the Festival has been impressive despite all the complications of transport, mobility ...

Maybe that's how it will play next year: there will be similar or more transport complications, but we will work out just as well.

Why did you decide to change it from April to July?

This is a decision that Perugorría made and was very advised by meteorologists. The rains affected many activities, but one fundamental reason is that the festival is having a lot of impact among children and adolescents and on that date they are on vacation. The “accidental” experience of doing it in July two years ago showed us that it was a moment of great impact for that sector. Pichi decided it was July and we all agreed, in the end it is all more productive as well.

It is very good the division that you have made of the festival - one is in charge of one thing another of the other - it shows a lot of momentum in everything.

Pichi takes care of many things and I do much less ... (Laughs) This stage is very interesting for me. In an initial stage I accompanied Humberto, then I stayed alone for some years and for about 7 years I was distanced - which coincided with a time when the Festival was not strong. After taking Perugorría the festival is again very powerful and being able to accompany it in these last almost three years was a privilege.

I stayed in an area that matters a lot to me: programming, the most conceptual area. There is a whole multidisciplinary team that deals with and is working in another scenario, in another context, at a time of changes also in the country, in which events have to adapt to a new economic approach, to a new look of more self-management, and you have to divide the functions. Pichi is an "orchestra man" in this and has a team. I am working with another team - not with the one I created or the one that was changing - but it is very interesting because there are many young people and you learn a lot with them.

I used to ask Pichi to give me some guidance, a little brush of the festival's next thing, but he hasn't told me, will you tell me?

If he doesn't do it, I'm not going to look for that problem ... (laughs). In general terms, the team feels very calm about the results of the year 2019 and we are really projecting a year 2020 from all those things that we had considered, were successful and that we have to take great care for the future.

In addition, the people of Gibara adore you all, support you and help you and we will also be there to support you.

That's great, so we'll wait for you next year too.

On the cover: Jorge Perugorría, Marta Nin and Jorge Benvenuto