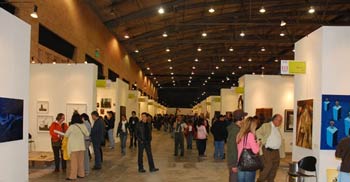 The 7th issue of Arte por Excelencias magazine will be launched during the 6th edition of ArtBo, which will be held in the Colombian capital on October 21.


This time Arte por Excelencias includes reviews on Cuban creators Raul Cordero, Eduardo Abela and Ania Toledo, as well as the Brazilian Jose Damasceno, and a tour through Mexican art with reflections of Indira Sanchez Tapia and a broad essay analysis on the Chilean project VÄLPARAÍSO INterVENCIONES. As main course, the summary includes a text on Uruguayan artist Luis Camnitzer, paradigmatic creator of conceptual art in the continent and an interview to one of the main promoters of Latin American art, Dominican Gary Nader.


Bogota’s International Fair of Art has taken in proposals presented by 51 galleries from several countries, 14 of those are Colombian. It’s vital for the organizing committee to consolidate the event’s role as cultural and commercial space in order to promote the emerging Latin American art. The Fair already has a regular and specialized audience integrated by collectors, gallery owners, curators and art critics who are looking forward to knowing contemporary tendencies of art in Colombia and Latin America. ArtBo attempts to put in the map new trends and typologies of contemporary visual arts. Arte por Excelencias is media partner for this edition, organized by Bogota’s Chamber of Commerce at the International Center for Business and Exhibitions Corferias.