Chile Arte Extremo: A New Stage in the Change of Century 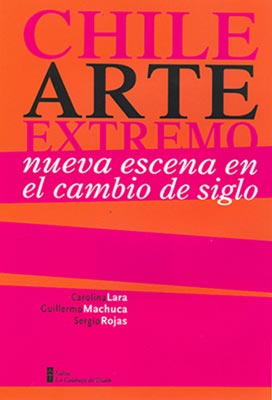 The research conducted by journalist Carolina Lara gathered theorists Sergio Rojas and Guillermo Machuca, and it’s aimed –through interviews to outstanding artists, pictures of works and analytical texts– at the group which popped up between the mid 1990s and early 2000, within a context of transition, post-dictatorship, neo-liberalism and globalization; when Chile’s cultural institution-oriented drive was formed and the stage opened to the international scenario.

The publication (bilingual), made by Calabaza del Diablo Publishing House, puts together theoretical, journalist and unprecedented photographic material, conceived as a consultation tool for many people, specially students, artists, teachers and specialists, and it represents a contribution to the spreading, comprehension and historiographic heritage of Chilean contemporary art.

Chile Arte Extremo…gathers 20 artists thanks to the 2004-2005 research project funded by Fondart, which includes, for example, the last interview –and one of the few– made to Guillermo Cifuentes, excellent local exponent of media arts, who died in 2007; to Ivan Navarro, who presently works in New York, when he wasn’t still dreaming of so successfully representing Chile at the Biennial in Venice as he did in 2009, and being as famous as he currently is.[1]

How has the genesis of your productions been? What’s the idea of art developed by artists who emerged in this period? What are the peculiar topics and strategies, as well as possible links and historical circumstances, which have determined them? What’s the look established by young creators about today’s Chile? These are some of the questions broached in the interviews and complemented with pictures and images of works, with the collaboration of photographers Gonzalo Donoso and Jorge Brantmayer.

In parallel, theorists Guillermo Machuca and Sergio Rojas propose their particular view on this scene, time and location, and they deal with topics such as the relation with precedent art (neo avant-gardism and Advanced Scene), the proliferation of high art schools, the academic molding of languages, the renovation of genres, the internationalization of strategies and the relation between art and context, among others.

The 20 artists have played a leading role in a particular moment of our art history, looking for instances and support so as to develop a powerful and highly critical body of work, which turns out to be locked up in spaces and it’s far from the common audience. These meaningful situations for national identity are installed in the bicentenary context through a kind of journalism specialized in dialogue with theory. The book is inspired by the idea of reaching different audiences, reflecting on what we are in a decisive and fundamental instant, and spreading art trends linked to the social trappings.

Carolina Lara (1971) is a journalist who studied at Concepcion University (1989-1993). Graduated in Aesthetics at Chile’s Catholic University (1994-1995), and Magister in Theory and History of Art at Chile’s University (2009). She’s the former editor of Arte Al Límite magazineand she collaborates with El Mercurio newspaper since 1995. She writes about art for some international magazines, just like ArtNexus, Arte Al Dia and Arte por Excelencias, among other publications and catalogues for artists. Likewise, she works in the management, teaching and cultural spreading scenarios.

[1]Search in (http://www.arteporexcelencias.com) and http://www.revistasexcelencias.com/Arte/ the interview recently conducted by coauthor (Carolina Lara) to Ivan Navarro: “I don’t think there are strategies of artistic success”): Arte por Excelencias, a. II, no. 8, 2010.

SKIRA Editore. Contemporary Voices from the Asian and Islamic Artworld