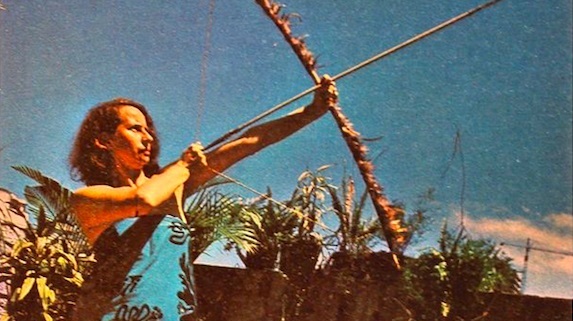 Anna Bella Geiger (Rio de Janeiro, 1933) is a pioneering artist in the Brazilian scene, with a truly innovative and experimental work that intercrosses dimensions and symbolisms of various orders: political and personal, corporal and conceptual, formal and aesthetic. Geiger was one of the first artists to engage in abstract art in Brazil, participating in the historic and inaugural exhibition of Brazilian abstract art held at the Quitandinha Hotel, in Petrópolis (RJ), in 1953. Since the 1970s she has also worked with video, conceptual art and mail art.

Organized by MASP in partnership with Sesc São Paulo, this show borrows its title from one of Geiger's most emblematic works, Native Brazil/Alien Brazil (1976/1977), which serves as a starting point and common thread for the exhibition. In this series, the artist appropriates postcards that represent in an idealized way the daily life of the Bororo, an indigenous people of the state of Mato Grosso. These images are seen to be very perverse when considered in the context of 1970s Brazil, when the indigenous peoples were suffering from the violence of the military dictatorship's policies. For each postcard, the artist developed rereadings based on portraits of herself and her family, made on the veranda of her house. In this work, as in various others, Geiger questions the hegemonic narratives, Brazil's colonial past and the country's social reality, articulating politics, self-representation, irony and fiction, often based on an autobiographical perspective.

The show features 190 artworks, produced in the period spanning from the 1950s to today, in different formats, media and languages, providing an overview of the extraordinary scope of Geiger's work. The exhibition thus includes informal abstraction, the artist's interest in the interior of the human body, self-portrait, maps, geographies, landscapes and equations, as well as criticism of art systems and analyses of political and historical issues of Brazil.