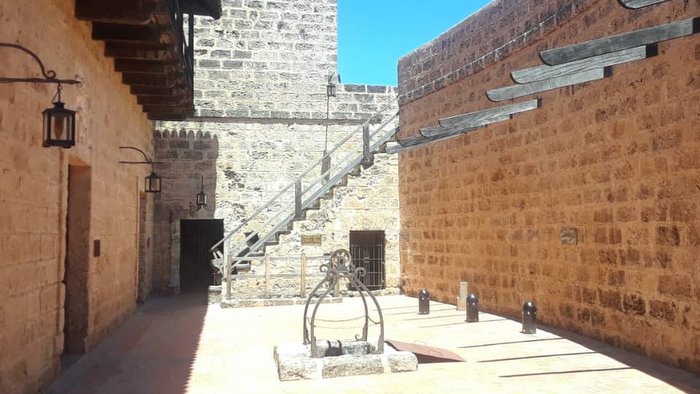 The Cienfuegos Fortress as a cultural and tourist destination

The Fortress Nuestra Señora de los Angeles de Jagua stands out among those of its kind in Cuba for having been erected (1733-1745) before the town was founded (1819) that supposed to protect, the former Fernandina de Jagua, nowadays Bicentenary city of Cienfuegos.

But that is not the only singularity of this renowned construction of the eighteenth century, the work of the engineer José Tantete, National Monument and became a history museum, specializing in the Safeguarding of the Intangible Cultural Heritage and military fortifications of that period, as expressed by the MsC Marisol Otero Álvarez, director of that important cultural institution, which made the Excelencias Group headed by its president, Mr. José Carlos de Santiago, cross the impressive southern bay.

With its cubic structure, two levels and drawbridge (only this works in the country), this building is located just at the entrance of the bay "that in the eighteenth century was considered by pilots of height of the Kings of Spain as the Best of America, due to its 88.4 square meters, it was surrounded by forests of precious woods, as well as by herds and pens, "explained the specialist

It emerged in order to preserve the smuggling trade bay, while at the same time it established the Spanish power in the south-central region of Cuba, affirmed Marisol.

Several rooms have the Fortress of Our Lady of the Angels of Jagua where a modest number of collections is exhibited, but very valuable, Marisol told José Carlos de Santiago when he was interested in the pieces that he treasures. Then he showed him how the projectile had evolved in America, the different types of weapons; the room of the Commander, that of Torture and that dedicated to the fishing tradition, the Chapel, and so on.

He also referred to the national network that is gestated to group the Cuban defensive fortifications, in their objectives and alliances with a view to preserving and studying the built military heritage.

Coordinator of the local project «La Fortaleza as a tourist destination», Marisol also mentioned the serious community work carried out in this popular council that has 15 000 inhabitants and is made up of the neighborhoods: La Loma, Camp 7, Ciudad Nuclear and Castillo Peché, it is right in the latter where the Fortaleza Museum carries out its main task of rescuing public spaces, such as the former Villa Mirtha, future Interpretation Center and Management of the Intangible Sailor Heritage.

He also announced that the Castle Park will be rebuilt soon.

The hosts did not let José Carlos de Santiago and his delegation leave without first tasting the seafood, or as it is called there, a mountain range, with a crab base, rice with fish, bonito wheels and the delicious seafood broth, prepared for the occasion by Saylí Arias, specialist of the Museum who kindly invited them to his house.