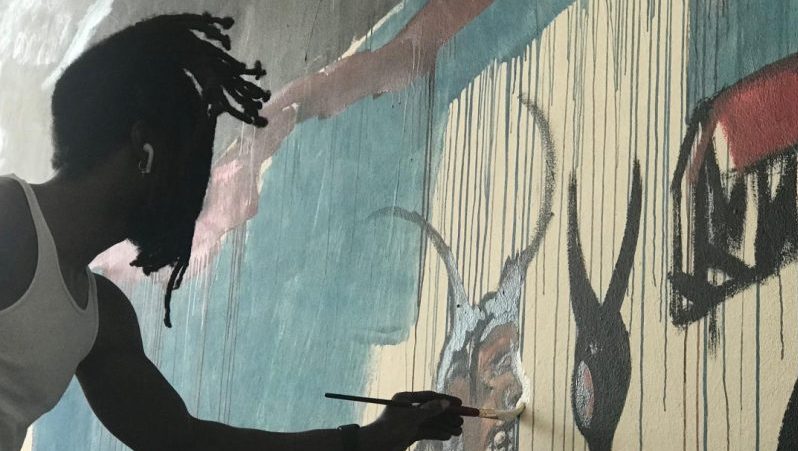 Curated by Arden Sherman, with Marie Vickels and Katie Hood Morgan, 516 ARTS’ new exhibit Dust and Specks on the Sea presents approaches to the subject matter, materials and processes that address contemporary practices by various artists of the Caribbean region. This helps create a globalized space encompassing an art world that puts pressure on who is at its “center” and who is on its “periphery.”

Suzzane Sbarge, executive director for 516 ARTS, says, “When creating an exhibit, I ask myself: Why here and why now?” Sbarge says that there are parallels between Haiti and the French Caribbean with Albuquerque which largely relate to issues around colonialism. In 1964, while flying to the “French” islands of Guadaloupe and Matinique, French President de Gaulle said irreverently, “These islands are dust specks on the sea.” Viola Arduini, education and outreach manager for 516, states that judging the land through a colonial gaze is not unique to the islands, and it is something we still continue to see even in New Mexico. Arduini points to exhibits such as a piece of driftwood, and another exhibit that focuses on the exportation of goods, as being symbolic not only to the colonialist issues of the islands but also to America as a whole.

Dust Specks on the Sea

Dust Specks on the Sea features 27 Black artists in a traveling exhibit that is particularly relevant amid the ongoing BLM Movement. The new mural at the entrance is one of a kind, created by Ronald Cyrille. 516 ARTS commissioned the mural by the Guadeloupean artist, who came to Albuquerque specifically to paint it. Cyrille’s street name is B.Bird, and he first showed up in the exhibition with a piece titled “Key Escape,” which presents cartoonish black hands sculptured from fabric gloves with hot pink nails that reach out of a boat. The boat is run aground on Guadeloupean sand and filled with green moss to demonstrate the uselessness of the vessel. The work evokes memories of the transatlantic slave trade which forced Africans to the Caribbean where they were forced to be slaves for British and French plantations.

Another striking exhibit at the gallery is “Still Life with Flowers (The Spectacle of Tragedy)” by Jean-Ulrick Desert. Desert’s piece is composed of garlands and holographic tape with flower petals and pastel pinks showing the stereotypical hallmarks of a girl’s room. The letters on the garland spell “Fabienne Cherisma,” who is a 15-year-old girl who survived the 2010 Haiti earthquakes and later, tragically, was shot by police for looting two plastic chairs and three framed pictures.

Late last month Albuquerque Museum Curator of Art Josie Lopez presented a lecture discussing work by artist Jacob Lawrence depicting leader of the Hatian Revolution Toussaint L’Ouverture. Lopez highlighted the importance of the first successful slave revolution in the Western Hemisphere, particularly in our current political moment. Lopez states, “This seems to be a passive presentation of history as opposed to understanding that there is an aggressive element as to why there are destabilized political and economic systems on the island itself.” The problems facing Haiti today are not unique to the islands and leave us to consider the harsh principles of colonialism from the lens of both contemporary and historical artwork.

Dust Specks on the Sea: Contemporary Sculpture from the French Caribbean and Haiti will be on display at 516 ARTS (516 Central Ave. SW) from June 19 to Sept. 18.