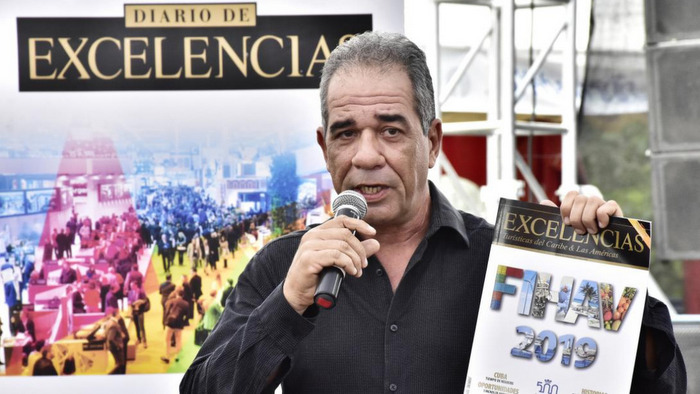 The session on Wednesday, November 6 was, in addition to being productive, rewarding for the Excelencias Group, while the products and services available to customers, collaborators and good friends were presented.

The 171 edition of the Magazine Excelencias Turística del Caribe y las Américas, which is mostly dedicated to FIHAV 2019 and shares thematic axis with the 500th anniversary of the founding of the town of San Cristóbal de La Habana, circulated once again in that space for everyone's approval, as well as access to the most recent printed product of the Excelencias Cuba Guide and its updated digital version with geolocation and offline map.

Arte por Excelencias also circulated with its 48th edition, which pays tribute to the 5 centuries of the Cuban capital from its cover to the inserts that allows readers to have a material worth collecting, and has offered its pages to important cultural companies, which are in this edition of the fair, to make their products visible in a suggestive and very elegant way.

Special moment was also dedicated to learn about the possibilities offered by the Gold Black marketer, created in 2001 and which achieved great recognition in 2006 when it began to venture into e-commerce and launched MallHabana, the Group's virtual store, according to the official of the company, René Legrá.

It was also explained that to commemorate the 500 years of the capital, the hot air balloon launched for the first time in the framework of FitCuba 2018, will be "flying" in different parts of the city.

In order to give a happy closing to the meeting, the call for the Excelencias Cuba Awards was launched, which since its first celebration in 2008, has recognized important personalities from different fields, and in culture has been awarded, among others, the prima ballerina assoluta Alicia Alonso, the musician Leo Brower, the intellectual Roberto Fernández Retamar or Dr. Eusebio Leal.

On the cover: Jorge Coromina during the presentation of the Excelencias Group at FIHAV 2019

Previous publication Calouste Gulbenkian Museum. Art on Display 1949-69 Next publication We bet on the language of Cervantes