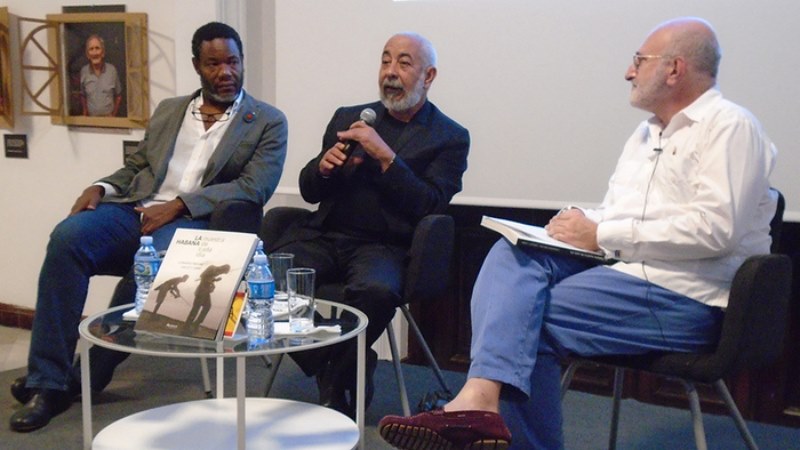 The five languages ​​of Leonardo Padura

The book Our Havana of each day, by Leonardo Padura and with photographs by Carlos Torres Cairo, was presented at the Embassy of Spain with the assistance of the ambassador of that nation in Cuba, Juan Fernández Trigo, who officiated as moderator of an intense exchange of the authors with the large audience.

Padura, the most widely read living Cuban writer, is the author of a novel that continues to reap laureates and new readers in the world: The man who loved dogs. In 2012 he won the National Prize for Literature in his native country, and five years ago one of the highest awards given in Latin America: The Prince of Asturias of Letters. He continues to write from the Mantilla neighborhood, and perhaps that is why this book about Havana is, in addition to a tribute to the Cuban capital, one more award given to his vast work.

Carlos Torres Cairo is an engineering graduate of the José Antonio Echeverría Higher Polytechnic Institute. He has been dedicated to photography since the eighties of the last century. He directs the creative group Cairostudio, and has specialized in book publishing and curating exhibitions of revolutionary epic photography. “Making a group of photographs in such a short time - he explains - was difficult, because first I had to read a large part of the book and get excited with some of them. The most important thing for me was to rescue my origins, symbols, images that told me things about my youth, my childhood. It has been very important to be able to retake another type of photography that was very interior, that had nothing to do with exactly what one is used to seeing about the city.

Our daily Havana is announced as a look at everyday life in the city that has just turned five hundred years old. Printed by CG for Ediciones Aurelia, from Spain, specialized in Cuban publications, the volume has three sections: «The city and the writer», «Havana, love and pain» and «Ghost hunting», with a selection of texts from the philologist and screenwriter Lucía López.

Regarding some of the texts included in the book, Padura comments on the journalism he wrote in the Juventud Rebelde newspaper in the 1980s and which today constitutes an obligatory reference for the press of that time. «I wrote stories that everyone knew something about, but nobody knew everything: that of the Virgen de la Caridad del Cobre, that of the Bacardi rum, that of the Chinatown of Havana, that of Yarini, that of the French in the Great Stone ... They were stories that were just in the unofficial Cuban history, but very close to Cuban history ».

From a phrase of Unamuno - «We must see the universal in the bowels of the local, and in the circumscribed and limited the eternal» -, the member of the Cuban Academy of Language also reflects: «In my novels, all parts from Cuba and returns to Cuba, through the appropriation and the look made by the writer, who tries to understand, or to understand himself and his circumstances, from a much broader perspective than the local. The local gives you a language, a perspective, a look with respect to reality, but you have to know how to look up and look over it, and see that the world is wide and alien, but neither as wide nor as alien, because the human condition is universal, the problems of man are the same, or very similar depending on the circumstances, times and places, and that is the meaning that I have given to these literary journeys ».

According to its use of the language expresses: «I am able to speak as in five languages ​​in Spanish. I do not make concessions to a linguistic or communicative facility, on the contrary, I put difficulties to the reader. In Mario Conde's novels, for example, I try to write in the best possible way, with the best adjectival possible, with the highest language density, but always considering something I learned in some of the texts that are included in this book: the first thing is communication ».