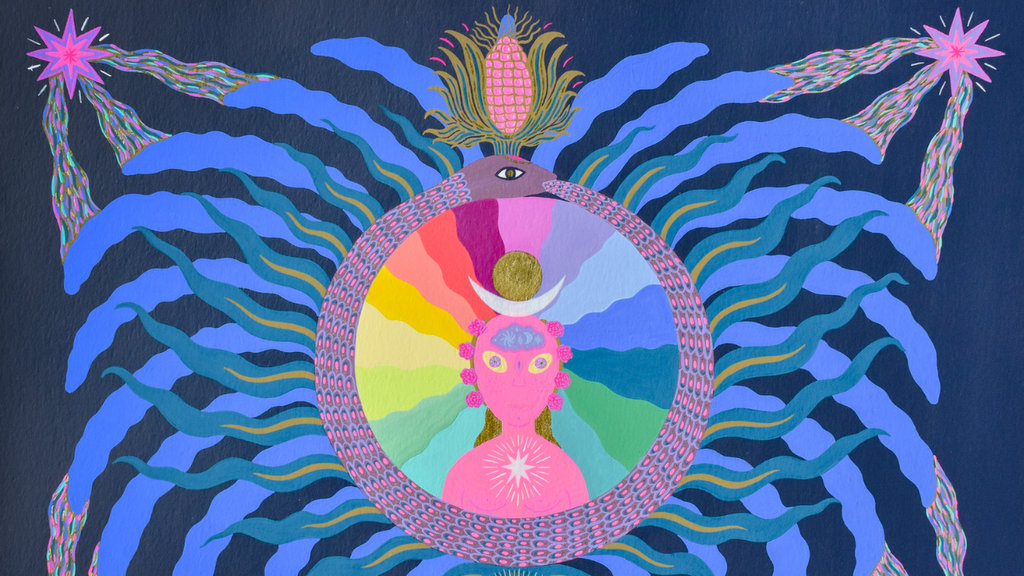 Cosmic Visions is an exhibition of mixed-media works on paper that imagines other possibilities of existence in the universe. Other-worldy landscapes, intelligent life, as well as flora and fauna pulse in hyper-saturated colors.  Oaxaca-based artist Mirel Fraga’s interpretation of cosmic objects such as galaxies, planets, stars, satellites, particles and energy as if viewed through another sensorial apparatus. Other works depict what the artist calls “reality tunnels”, open gates to connections with other worlds.

Mirel Fraga is a multi-disciplinary artist working in illustration, drawing, graphic arts, mural painting and design. The most important themes in her work are nature and all its elements, flora and fauna, women and their connection with the universe, the cosmos, life on and outside the Earth, magical objects, colors and our relationship as human beings with all of them.

Originally from Puebla City, Mexico, Mirel started her professional career as designer in 2006, working in independent illustration, textile, editorial and graphic design projects and also in cultural institutions of Oaxaca City such as Jacobo and María Angeles Workshop in San Martín Tilcajete, the Textile Museum of Oaxaca, and the Center for the Arts of Oaxaca in San Agustín Etla. She also belonged to a Oaxacan women collective of artists, artisans and designers (Miku Meko), where she exchanged creative knowledge of diverse techniques such as ceramics, traditional/contemporary textiles, natural dyeing, design, and embroidery. Mirel is also a cofounder of the independent publisher house Polvoh Press Oaxaca.

In 2019 she received the acquisition prize in the graphics category for the First Arts Biodiversity of Mexico 2019 Biennial with her 6-color water-based serigraph “Flora”.