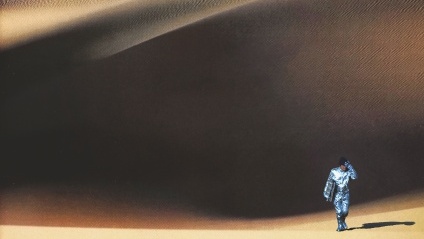 German painter and sculptor Heinz Mack (*1931), co-founder of the ZERO group in Düsseldorf in 1957, ventured a radical new departure in the post-war period and pioneered research in the fields of Light Art that still have great resonance today.

With a selection of 60 works, the exhibition presents all aspects of Mack's oeuvre and the sheer wealth of media he has explored: from Light Art, kinetic works and Land Art, to drawings, paintings, and sculptures. Throughout his career, his investigations into light and the dynamic power of structures have remained at the center of his work: from his seminal Sahara Project (1958/59) and Tele-Mack (1968/69) _ a film in which the artist is portrayed amid the desert expanses conducting his experiments_ to his recent Chromatic Constellations, paintings in which light manifests itself through subtle chromatic tonalities that make the surface appear to vibrate.

Paying tribute to one of the great artists of our times, the exhibition marks Heinz Mack's 90th birthday.