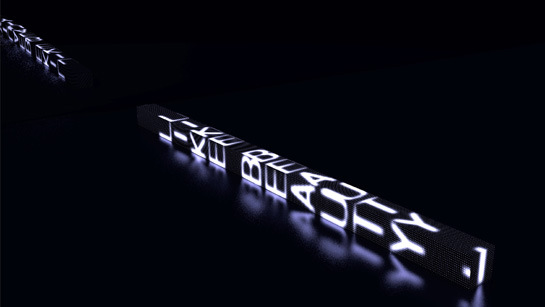 Like Beauty in Flames is a new work by renowned artist Jenny Holzer that presents her signature text-based art through the medium of augmented reality (AR). This unique artwork, made exclusively for the museum's collection and available through a standalone application for mobile devices, provides three distinct AR experiences: two site-specific works that engage the Guggenheim Bilbao's architecture and a third that can be accessed from anywhere in the world.

Like Beauty in Flames harnesses new technology in a continuation of what Holzer does best: placing thought-provoking texts in the public sphere in a democratic and accessible way. Inside the museum, an AR version of one of Holzer's LED signs glides through the central atrium, the column bending and spiraling as Truisms in English, Spanish, Basque, and French scroll past. Outside, AR projections appear on the museum's facade from five locations around the campus in a virtual echo of the artist's monumental work For Bilbao (2019).