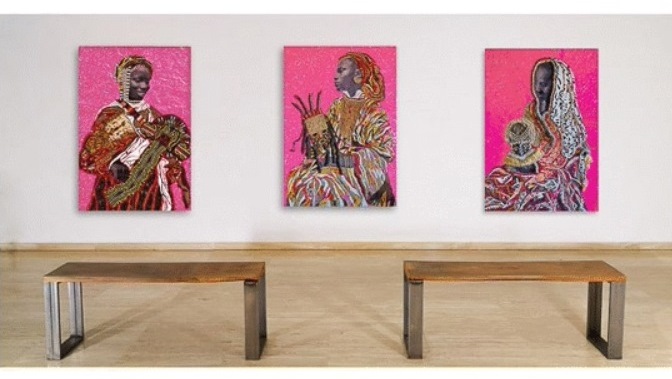 "Interested in cultural exchange since childhood, German artist Marion Boehm spent 10 years traveling the world while working for Lufthansa before moving to South Africa with her husband and two daughters in 2010. Living in Johannesburg and teaching art at her children’s school, she took drawing lessons with the celebrated South African artist Kay Hassan, who introduced her to the local places that inspired him, including Bolo’s community center in Kliptown.

Traveling with a black friend to the Soweto township, Boehm had a life-changing experience. Stopping at Bolo’s place, a gathering spot and would-be museum of objects from apartheid times run by photographer and collector David “Bolo” Meyer, Boehm was so taken by the people that she met, stories that she heard and things that she saw, she started making art related to the recycling of materials she observed in the Kliptown community.

Initially creating mixed-media collages from the black and white photographs that she took of the locals by altering the portraits with pencil, charcoal, pastels, paint and bits of torn paper, before long Boehm was adding fabric and found objects to make her portrayals even more elaborate, and thus more lifelike. She then began to use photos of people from the colonial era and portraits from contemporary times to blur the line between the past and the present.

Boehm’s desire is to nobly depict her black subjects in the manner that Europeans have been historically portrayed. Not unlike the African American painter Kehinde Wiley, she casts her characters in a manner that’s intended to change the existing canon.

She has portrayed artists whom she admires—such as Serge Attukwei Clottey, Saidou Diko, Evans Mbugua and Barthélemy Toguo—as royals, dandies and chiefs, but more often it’s women—seen from a feminist, ennobling point of view—that occupy center stage in her captivating series of portraits. Constructing a new way of seeing African women, Boehm aims at the unexpected, rather than at being historically or ethnographically correct.

Like an Afrofuturist, she shows us what tomorrow might be or how things might have been if colonialism and apartheid had never happened and racism didn’t exist. In Leather Apron, from her Silent Beauty pictures, which is one of her earliest series, Boehm captures the beauty of a Kiptown woman who earns a living with her hands. And in Precious, from the same series, she shows a glowing female subject simply yet gracefully dressed in traditional Shweshwe fabrics. Both women have been lovingly turned into art, and when their pictures were first exhibited at Bolo’s hub, they—and their fellow Kliptown residents—were honored.

For the pictures Ancestors and Great Grandpa, both from the Ancestors series, Boehm collaged the backgrounds with torn texts from the South African newspaper The Star, with key words related to local concerns, such as HIV/Aids and Zulu, popping out in bold type. Words are also displayed on the skin of the subjects, but in these instances the texts were written by the artist to celebrate the personas of the women, who are fancifully outfitted in colorful, patterned dresses.

Besides elegantly depicting distinctive females, the crucial parts of these pictures are the rare European crowns of death with the African ancestorial images that the women embrace. A double-edged sword of sorts, the beaded crowns (used to decorate Christian graves on special occasions) put the African women (who also decorate themselves with beads) on the same footing as their European counterparts, while equally commenting on their forced participation in Christianity by the colonialists.

In Leopard Girl, the artist lets the object—a tapestry of a crouching animal in the wild—define the picture. Collaging the face, arms and hands of an African femme fatale into a flowing patterned gown, she filled the figure’s exposed skin with an Arabic text and placed her comfortably atop the leopard, as if the young woman was at one with her environment. The jungle, however, is less evident in Boehm’s Legacy series, which positions ornately clad women against brightly colored backgrounds while holding symbolic African masks.

Channeling the Afropunk scene through the vibrant, hot-pink and lime-green, torn-paper collage grounds, the women in the Legacy pictures are conduits to the past yet speak to the present. The lady in Bamileke Mask affably sports a colorful fabric, bead and shell covered outfit when holding an elephant mask from Cameroon, while another woman in Dogon Mask grasps a shell-decorated mask from Mali.

Although the African masks that the subjects carry have spiritual significance within their originating tribes, they seem just as indicative of the masks Westerners wear every day, particularly on social media, where true identities can be veiled behind a public persona. The subjects in Boehm’s pictures have taken their masks off to show us who they truly are, yet since they are the artist’s inventions, what they really reveal is just how deeply she reveres the culture that she has embraced—and she invites us to do the same.