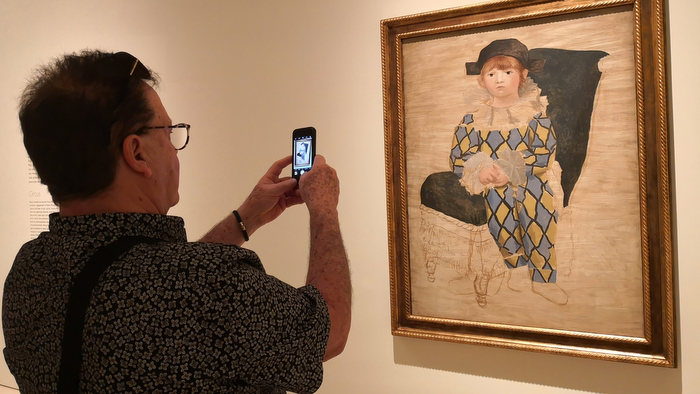 Until June 2, the Picasso Museum Malaga presents the figure and the story of the Russian dancer Olga Khokhlova, Pablo Picasso's first wife, with whom the painter from Malaga had "a complex and passionate love story".

This is attested by the almost 350 objects (including paintings, works on paper, photography, letters, documentation and films) that make up the exhibition, which previously could be seen in the National Picasso Museum in Paris and in the Pushkin in Moscow.

"In its interior and for many years, its drawers guarded Kodak envelopes full of photographs that told the story of marriage, their life together, their travels, the artist's workshops ... Other compartments preserved hundreds of letters in French and in Russian, tied with small pink or blue silk bows ".

Now, this legacy (the only personal good that she retained after the separation) has allowed contextualizing some aspects of Picasso's work during his life with Olga (1917-1935) and at the same time, recreating a personal and artistic history that runs parallel to another political and social history.

Olga Khokhlova was born in what is now Ukraine, in 1891, and died in Cannes, France, in 1955. The daughter of a coronel of the Russian imperial army, she joined the Russian Ballets in 1911, a prestigious and innovative dance company directed by Sergey Diághilev, with whom she traveled through Europe and the United States.

In 1917 she met Pablo in Rome, when he performed the sets and costumes of the Parade ballet. They married in Paris, on July 12, 1918 (with Guillaume Apollinaire, Jean Cocteau and Max Jacob as witnesses) and, in February 1921, their first and only son, Paulo, was born.

From their first meeting, Olga became the artist's favorite model. In fact, it was the female figure most represented by the painter in that decade and the next. One of the most important works of the exhibition, "Thoughtful Olga ", held in Paris in the winter of 1923, faithfully portrays the "Melancholy and thoughtful beauty " of the dancer, who saw her family (and her country) for the last time in 1915, because they were "trapped" in Russia by the historical events of the Bolshevik revolution and everything that came later.

The life of Olga with Picasso coincided with the rise of the recognition of his work and a level of life that took them to important receptions or spend long seasons on the Riviera. The arrival of Paulo is also well represented in the expo, with numerous oil paintings, some world famous, such as "Paulo dressed as a Harlequin", from 1924.

Motherhood, family life ... are other Picasso themes of the moment, as in "Family on the seashore", 1922. In one of the home movies, which are screened for the first time, you can see the happy and young couple with their son ... But the appearance on stage of Marie-Thérèse Walter, in 1927, came to shake the marriage, already marked by jealousy.

Then, the figure of Olga in the work of the malagueño changes noticeably, giving an account of the marriage crisis. In addition, the artist relies on mythology to tell his personal story, creating a series of engravings of minotaurs that speak of the "complexity and ambivalence of the relationships he maintained with women."

Also from that time (beginning of the thirties), are the works with crucifixions and bullfights, used as metaphors for their painful marital experience. Finally, the couple separated in 1935; although Olga continued sending letters and family photographs to who was her husband legally until his death, twenty years later.

Over time, the presence of the Russian dancer in the work of the Spanish painter was replaced by that of other women who would also mark him: Marie-Thérèse, Dora Maar, Françoise Gilot ... but that, surely, will be material for future exhibitions.

For the moment, and after its closure in Malaga, "Olga Picasso" will travel to CaixaFórum Madrid (June 18 to September 22), and her space at the Malaga-style Buenavista Palace will be occupied by "Bruce Nauman. Stays, bodies, words ", the first large format exhibition in Spain of the American multimedia artist (June 18-September 1, 2019).

On the cover: Visitor in front of Paulo dressed as a Harlequin, 1924