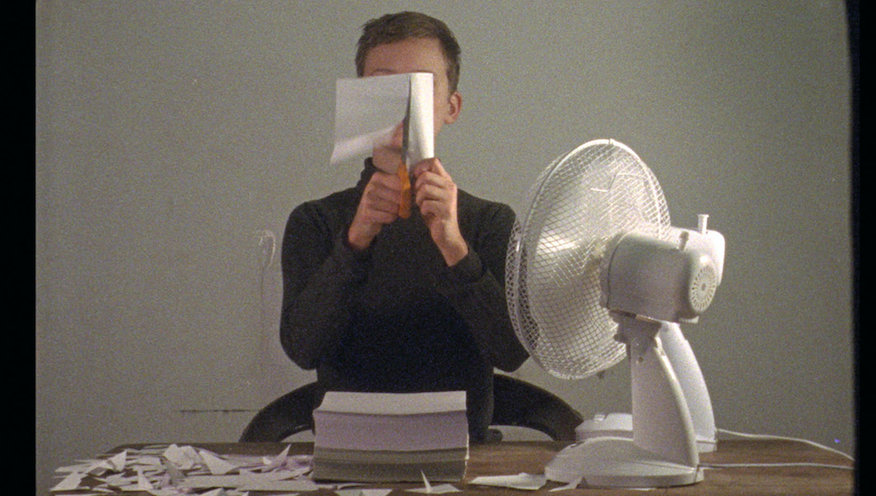 Is this destruction as a productive force or a game of destructive destiny?

In the exhibition Taumel moralischer Art, Caroline Haberl and Mira Klug deal with a seemingly naïve act of destruction. Where does the game end and destruction begin? Where is the boundary between standstill and movement and what does destruction have to do with it? In three video works, questions like these are posed and left open by means of small gestures.

The two artists always choose their form of presentation according to the content and materials of their works. In the video Taumel Moralischer Art #1, pristine white printer paper is cut up. A psychologically symbolic act of destruction or a seemingly naïve act of destruction. The projection of this simple act onto a screen moved by fans symbolically brings wind into the snippets. The movement of the projection screen changes the image in an almost cubist way. A seemingly senseless process of stagnation is transformed into a multi-layered moving film.

Standstill and movement are also essential in the second film Movement at a Standstill. The person on the exercise bike resembles a hamster on a wheel. Both resemble the modern slaves of neoliberalism, permanently in motion in order not to have to think, to be allowed. As long as the economy is running, all is well with the world.

2020 has proven us wrong, we have experienced what real standstill is, just as restlessness is fuel-led by stagnation.

In Falls, the two artists describe the state just before or just after the fall. The constantly repeating process is superficially reminiscent of Buster Keaton or Charlie Chaplin. Underneath, it describes the human condition, the powerlessness before facts, the inflexibility in everyday life, the dance on the precipice.

The works of Caroline Haberl and Mira Klug can be viewed aesthetically, artistically, emotionally, but there is always a hook slumbering beneath the surface that opens up other groups of themes. The true point is hidden in the disguise, so to speak.