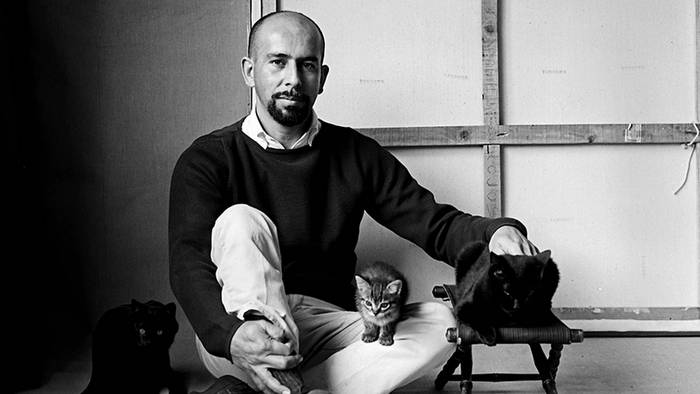 Bogotá- A name is repeated strongly in this 15th. edition of the Bogota International Art Fair, Artbo 2019: Eduardo Ramírez Villamizar, whose impressive sculptural work is present in several galleries here, such as the Nueveochenta (Colombia), León Trovar Gallery (United States), among others, and that They proudly show it. And it is not by chance, the famous Colombian sculptor and painter, already disappeared, is together with Edgar Negret one of the most prominent figures of Colombian and Latin American sculpture. Their traces in the volume were sown in many cities of our America, in the United States, and also in Cuba.

When one approaches his metal pieces, where steel, iron and many others predominate, a certain architectural air is breathed, because, as he confessed to this journalist one day in May 1988 in Baconao, during the II International Sculpture Symposium In Santiago de Cuba, he studied architecture for three years, but "I did not have the ability to build anything," and added that he was an admirer of architecture, because "I am interested in the relationship between sculpture and architecture, as there was in the works pre-Columbians, in the pyramids of Chichen Itza, in Yucatan, in those of Egypt, in those Gothic cathedrals that are sculptures outside and inside. "

Without knowing it, those confessions made in the fields of Baconao where he erected an important piece: Entrance to the sacred stones, the famous creator made clear his artistic testament: his unlimited love for the Latin American works made by his predecessors and that filled his soul when creating.

The Cuban piece by Ramírez Villamizar was conceived in welded steel sheets and is inspired by the ruins of Machu Picchu like many of his works. Since he visited Peru one day, the artist fell in love with Machu Picchu, the mystery of that place, because he remembered in his words in that interview that anyone with sensitivity should be marked by that experience. From that moment he created many works that he called: Memories of Machu Picchu. His work Entrance to the sacred stones, has no color like almost all his creation in metal, because the rusty iron, he said, is nothing more than the texture and tone of nature under control that provide a sense of strength and complement the architectural sense of his works. Del Cuzco made a comparison with his creative inspirations: the aqueducts, waterfalls and terraces benefit from the coloristic beauty of rust, as well as its structures, which are only structures and not transpositions of particular elements of Machu Picchu, he wanted to specify, because Nature is sacred.

When I asked for inspiration, the teacher said very quickly: "Actually, my work, despite looking thoughtful and cold, has always come out of intuition and sensitivity. Then the mathematical thought and control is added. Everything arises spontaneously. Contrary to other artists who say I am going to make a sculpture with such elements and conditions and suddenly they do the work and they find it plastic. In me, the sculpture comes out and then I can control it a bit. They are like IMPERATIVES OF THE INSTINCT".

The continuous and infinite form itself was one of the themes that he would develop at different stages of his sculptural work. And he noticed that among all the integrated geometric forms there was insistence on the rhombus, which appeared more frequently than the square, the rectangle, the triangle or another geometric form, and decided "in a thoughtful way that all his works were based on the form of diamond".

And the pieces are not repeated? I asked in amazement: "I am happy," he said, "to see what can be done using a single element. I always thought that this could impoverish the work, but wonders can be said with only one form."

Watching his sculptures in ArtBo 2019 come to mind the memories of a young man in front of the teacher, when he was not yet aware of the scope of his creativity, and one is excited to be able to see even after his physical disappearance, which occurred a few years ago, the imprint left for its predecessors, an imaginative, mysterious work that speaks of our Latin American roots, the strength of the men who inhabit these lands, and where one finds a hold to dream. Well, in the apparent coldness of Eduardo Ramírez Villamizar's works, poetry and memories of the most remote epochs are hidden. As a constant he always submitted to the form, construction, geometry, modules of continuous couplings ... And as he expressed that time on the Caribbean Island leaving his dreams and soul in the words: "I DO SONETOS, IT IS MY DESTINATION: With my sculpture I just want to say one thing and it is understood quickly, that the viewer reads it and almost immediately understands it. Like a Japanese poem, which in a single sentence says it all ".

A fair is a store of surprises, a place where we can dialogue with the souls and inner feelings of many artists, find answers to emotions, dreams, desires, and above all feel looking at their creations, which is the best gift to those who creates.

Eduardo Ramírez Villamizar, the famous sculptor, who in his life received important awards and recognitions in his native Colombia and in many others, as in the Biennial of Sao Paulo in 1969, simple and friendly, as I met him at that Symposium in Santiago, vibrates today in his works at ArtBo 2019, in any space where those pieces full of sensitivity and especially love for our Latin American lie. One more gift from the fair that has just begun ...