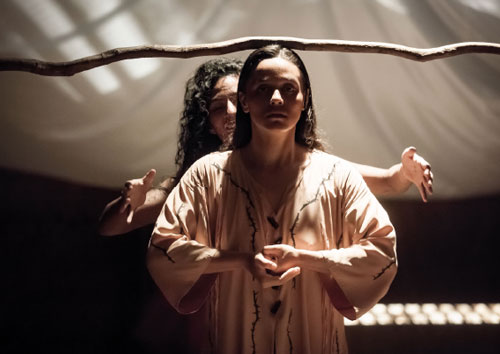 Latin America and the Caribbean on celebration

By the time the tenth edition of May Theatrical was over, season of Latin American Theatre celebrated every two-year period at the America House, there’re remains of unforgettable pictures of what was, without a doubt, another real Latin American’s party. The excellent variation of decors coming from seven different countries of this region, let’s say Argentina-Spain, Bolivia, Brazil, Chile, Martinique, México and Puerto Rico- also with Cuban groups, count on fifteen shows, examining the reality and creating worlds of fiction, clever enough to satisfy all the expectations.

The motto «Processes and results» was confirmed in fruitful sessions of removable decors which proved the teamwork of each group, always in open dialogue with others. Five seminars discussed about street scenes, with playing as a theatrical discipline, and the vocal technique to declaim a poem. Two exhibitions were inaugurated: a retrospective based on pictures about the May Theatrical along ten editions, and the other one with pages and saved pictures from the playwright, promoter and Latin American Theatre investigator Manuel Galich; also there were presented four new publications, among them number 187 from the magazine Conjunto (translation Unit).

Once more, with May Theatrical, the party was set. See you in 2020!

Previous publication Inside a man Next publication The Magazine 40, stronger, higher, more far