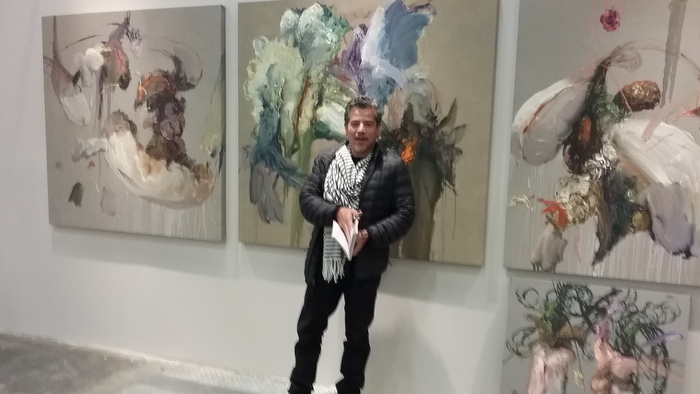 With a suggestive title The pleasure of excess, the Cuban artist Ángel R. Ríos showed a set of recent creations, in the gallery Terreno Baldío (Mexico) with great success of public and critics. Precisely with those pieces that have given him not a few joys, he participates in the exhibition that brought to the Bogota Art Fair (ArtBo) 2019 the Servando Gallery, of the Genesis Company of Havana, Cuba.

In this tidal wave that is the Fair, the attractive pieces of the creator, graduated from ISA (1989) and the National Academy of Fine Arts San Alejandro (1984), capture the eyes of visitors, critics and specialists who pass through that space. There is something different about them that makes them special, because of the striking colors of these immense flowers ?, or the strange shapes that are interwoven in the fabrics with an extreme force that attracts like a magnet, together with the bill, cleaning and a light unique that nuances them of a special aura…, they turn the pieces into a space of great creativity that make our imagination fly, and think of PAINTING, of the artists of centuries ago, so in their presence we feel a certain postmodernist aroma ...

In the development of a new stage in the plastic, the new winds brought by pop, op art, minimalism, conceptualism and many other trends, blew in the same fundamental direction of modern art. But with postmodernism things are different. This, in addition to denying the conceptual currents that preceded it, raises something much further: the overcoming of the entire Modern Movement.

Such overcoming includes a sort of return, qualitatively diverse, to the past. And it is, in truth, the only imaginable improvement, because it is very difficult to think of a change that was not one more step in the galloping succession of approaches and innovations typical of modern plastic.

Postmodernism proclaims not to move forward in the race, proposing to art, the abandonment of the invention in favor of an eclectic reuse of what has already been invented. Alleges against the passion for the change of modernity; to his eagerness for progress, transformation and originality he opposes the anti-utopia of taking advantage of what already exists. In that desire to deny the conceptual currents that preceded it, it raises something far beyond, the overcoming of the entire modern movement, which includes a sort of return, qualitatively diverse, to the past ...

Without neglecting anything current, if not reusing techniques and ways of painting to look for new airs, Ángel Ricardo Ríos, is above all a creator without borders of any kind, a researcher, a creative archaeologist, an ARTIST. In a stop along the way of the Fair, Ángel Ricardo Ríos (Cuba, 1965) overflows energy when talking about his work, which mixes passion, knowledge and a lot of security in his work, which has taken him on the long road artistic, to perform or, rather, play, different techniques where he has combined talent and imagination to reach this stage that fascinates him a lot. A look back, to collect and catch in the present a story, a time, a technique that brings out the pictorial yesterday.

My works - he said with loquacity - has to do with the Flemish painting of the fifteenth and sixteenth centuries, whose main characteristic was to reflect man in ordinary life, the landscape, still lives, fruits, common life, in a word, the banal themes. A primary need to portray the houses of the rich to illustrate their dinners, their horseback riding.

And this motivated him to look back, return to painting, recreate things, more or less, banal in the Latin American world. Many have asked me, he added, in recent times: What do you paint? Flowers? and they have even limited him: how ridiculous! he said with a laugh.

But the artist making, ignoring those innocuous questions of his "artistic career" continues his course, his creative compass, his intuitive desire to, rather than be different, go back, at the beginning, with the current, technological capacity, and accumulated experience, following the beating of his heart. "Behind there is a good intention -he affirmed with weight-, there is a whole story in this work, an inquiry into the techniques: in the use of color (there are many sepias), in the light that seems to come from the candles that illuminated that time the rooms, there are very dark atmospheres ... A way of painting beyond any tendency, but from the intuition. And so, seeing their enigmatic and attractive visions, it is felt that everything is impregnated with a dose of that characteristic sensuality, both in nature and in human beings. They are keys that emerge in the fabrics - with an intention, as confessed by its creator - to intrude between the forms and tones in the erotic universe, sex, in a very subtle way. The pieces exhale, within the visual strangeness of that world, for moments until mysterious, a certain breath of the great Renaissance works (where the formats also have a lot to do), and in certain compositions that makes it more attractive, sensual, to man from today. Not by chance it has been one of the most visited works in this Fair, without fear of being wrong.

But for the artist who has won important awards: Honorable Mention at the Fourth Biennial of Visual Arts in Yucatan, Mexico (2009), Prize at the 1st Outdoor Sculpture Contest, Cultural Corridor of La Roma, Mexico, 1994, among many others, the TECHNIQUE is also important. It was something he longed for a long time, to use oil that is not something so contemporary, for the idea of ​​permanence, and is something conscious. "I use it, both for the history it has and for the texture it gives me, I want the oil to be the fundamental thing." He has gone through different stages, has left traces in the different techniques of plastic art: engraving, drawing, sculpture, installations ..., and "now I return with strength to painting." Something also closely related to Flemish painting, whose beauty and to some extent naivety, has knocked on the doors at this time. Well, beyond the characteristics of that School in the use of bright colors, pigments for the illumination of certain areas, the large format ..., which are also constant in this current work by Ángel Ricardo Ríos, the use of oil adds to them. Well, the Flemish painters of the fifteenth century, although they did not invent this technique, were in charge of applying it systematically, thus contributing to its consolidation and dissemination between the fifteenth and sixteenth centuries. They used it with fluid inks and transparencies applied by means of glazes to reach those enigmatic, realistic lights, to gently shade and even tint the bottoms.

Now this postmodern painter, with a certain Renaissance air returns to ArtBo to leave men of the XXI open-mouthed with the magic of time, talent and that search for the past that is, after all, the mark that men carry, and, Of course they more, the artists of the future that is already today.