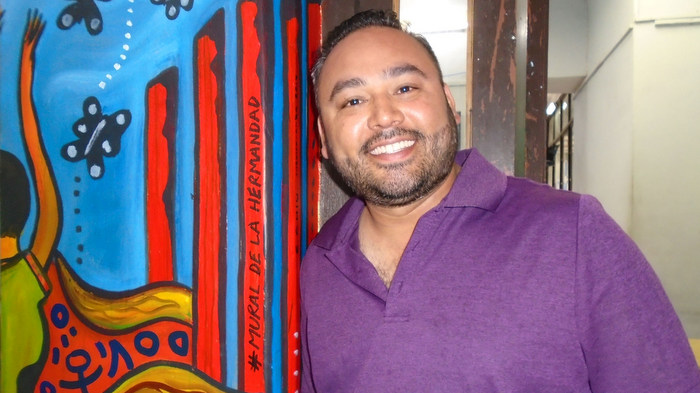 Above the wall, under the border

He does not mention at all the Guinness record that is intended to endorse that monumental work of eighteen thousand square meters that he has fostered on the border between Mexico and the United States. And the fact is that the Mexican artist Enrique Chiu (Guadalajara, 1981) knows that the most important thing of this artistic endeavor has been to unite creators from both sides of the border to paint in Tijuana, Baja California, a mural of the brotherhood with stories that allude to the drama of thousands of Latin Americans who every year try to cross over to the United States in search of a less uncertain future.

He has traveled to Cuba for the first time. I have it in front of me in the courtyard of Casa del Benemérito Benito Juarez, in the heart of the Historic Center of Old Havana, to tell Arte por Excelencias about the keys of their stay among us and the project that has been followed with enthusiasm for those who already qualify it as "a message of resistance and hope".

«My participation in the Biennial of Havana has been indirect—he says—. I came to Cuba with a photographic-documentary exhibition displayed here, at Casa Benito Juárez, about the exile of Leon Trotsky in Mexico and also about the house where he lived, which is the current museum about his life and his work, the one that I am currently working. I have made contacts with several Cuban artists, especially with Víctor Mora, who has opened the doors of his Paper Gallery to make a mural there. With Julio Peña I worked in the Graphic Experimental Workshop of the Plaza de la Catedral. Some friends of mine who live in Los Angeles came to Havana from the beginning of the event to make a photo documentary. Many possibilities and projects have been opened for me to return ».

The press has highlighted that the mural project of the brotherhood has been aimed at protesting against the wall that the current tenant of the White House, Donald Trump, intends to build on the common border with Mexico, and is also a denunciation of the policies migratory that the North American president promotes. «The brotherhood mural is a project that we are still working on, we started the 1st. December 2016, with artists, friends and other people who came closer. They were going to be a hundred linear meters of the border wall, next to the Tijuana beach. The plan was to be able to paint both sides and talk about peace, brotherhood between the two nations. Nobody believed in the project; I had to disburse all the initial money. A Latino television and radio association found out about it, they made me an interview that turned into a documentary, and it went viral, it reached half a million visits in two days. Suddenly people from all over the world began to come. The first day we were five, in the second the figure was fifty, and on the fourth day we reached two hundred people painting the wall. They were from Los Angeles, San Diego, New York, China, New Zealand, from all over the world. Trump had said that Mexico would pay for the wall, in a way it was an advertisement that he gave us. That became a very important social movement. The main Mexican newspapers gave us coverage and even the Ministry of Culture of the then government declared that we were the most important cultural movement in the north of the country. There have passed around three thousand seven hundred and fifty artists, including Cubans. We spent sixteen months painting more than two kilometers. We even received the visit of the German Symphony Orchestra, which played and painted with us ».

To one of our questions about the transcendent or insignificant nature of art, Chiu replied: «Everyone looks for a story in life, some miss the opportunity to do what they dreamed. I have tried to take a risk, to do it in the most sublime way. Art is a form of communication, and this project that we have fostered will be transcendent from the moment it is communicating to the world a call to peace, unity and brotherhood ».