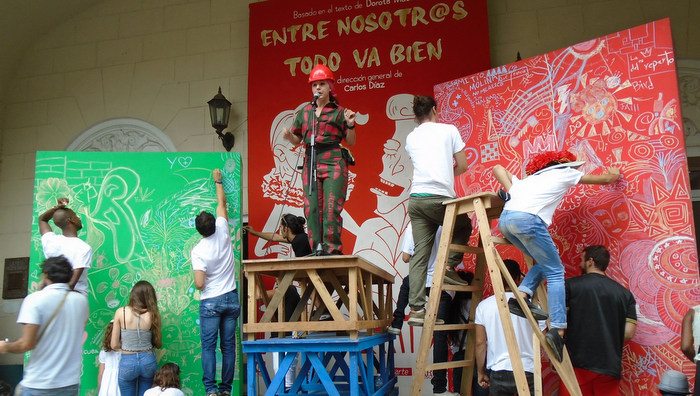 The construction of the possible city

The cultural project «Corredor de la Calle Línea», which takes place as part of the XIII Biennial of Havana, was inaugurated on Saturday, April 27 with a parade of La Colmenita Theater Company, which attracted a large audience and included other projects. community groups like clowns and zanqueros from the Historic Center of Havana. All, in contagious conga, filled with dancing, songs, games and drawings the segment of the avenue that converges in the street G. Further on, and until the environs of the tunnel that unites the Vedado with the municipality Playa, hundreds of artists belonging to the companies Acosta Danza, El Ciervo Encantado and Teatro el Público, as well as students from art schools and visual artists participating in the event, joined performances and acts to sow the seed of a project that still has much to offer in the immediate future.

The Cultural Line Street Corridor is proposed, with international collaboration, to revitalize one of the most important arteries of the city. It was an idea of ​​the Cuban architect and promoter Vilma Bartolomé, who has been in charge of the Spaces Project for twenty-one years. It is an important contribution to the cultural and urban developments that arise on the anniversary of the 500th anniversary of the Cuban capital, and taxes the process of sustainable regeneration of the city.

Historically, the avenue, with an extension of about three kilometers, has encompassed cultural institutions of diverse artistic manifestations, such as the Mella and Trianón theaters. More recently, institutions such as the Bertold Brecht and Raquel Revuelta rooms, the Casona de Línea and the venues of Acosta Danza and the theater group El Ciervo Encantado have been incorporated. The Line Street Cultural Corridor aims to create a more human project that will include the remodeling of parks and gardens and will benefit the inhabitants of the avenue itself. Rescue, as Vilma Bartolomé has said, the public services and the deteriorated urban furniture, and will link them to that cultural space so that they take advantage of children, seniors and families that add a conglomerate of almost fifty thousand people.

Last December, a subsidy contract was signed between the Administration Council of the Provincial Assembly of the People's Power of Havana and the European Union (EU), with financing of the latter of one and a half million euros in three years, which will be executed with the support of the Ministry of Culture of Cuba. In total there will be seventy-two projects that will be interconnected.

A great cultural center arises in the old bus and bicycle factory of Línea and 18 (originally tram station), and will become the main headquarters of the Corridor. In a block, and with a multipurpose design, all the cultural manifestations will be able to meet, so that when all the projects that enrich the avenue are chained, the habaneros and those who visit us will have a multiple range of options and spaces that will help to make the city we live more attractive and human.