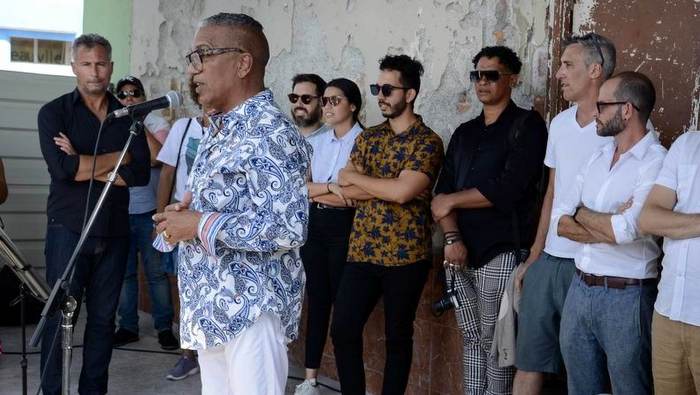 On the move Dedelmu: another dream fulfilled

"We defend art as an opportunity to transform the way human beings interact in the public space, and we have also been invited to celebrate the 500th Anniversary of our capital by the Office of the Historian, an offer that will allow us to extend in time and space our gesture of gratitude towards this wonderful city, "thus officially inaugurated Juan Delgado Calzadilla, creator and curator of the sociocultural project Detrás del muro or also known as Dedelmu.

I thank the humblest people, "he continued," simpler, who has worked on this great socio-cultural project. We will continue working on it. Starting today will be a happy time for me. This is a great dream and I fulfilled it. Thanks to all the artists, to the younger ones because these are their thesis. Many have not slept to inaugurate their works, especially to thank that wonderful team that I have, he concluded.

During the XIII Havana Biennial, performances, workshops, conferences, installations, video projections, happenings, among others will take place. Everything is grouped in the Liquid Stage, a space that integrates the central sample of the event and in which 28 Cuban artists participate including Pedro de Oraá, Pedro Pablo Oliva, Roberto Fabelo and Eduardo Ponjuán; and 37 foreign artists from 12 countries.

The team of Dedelmu has intended that this section of the Havana coast included between Malecón 307, future headquarters of the project, and Paseo del Prado is a workshop where the process and the feeling that the work is made by all prevail.

Previous publication Thinking the nation from Fine Arts in the XIII Biennial Next publication Re-thinking the future: The construction of the possible