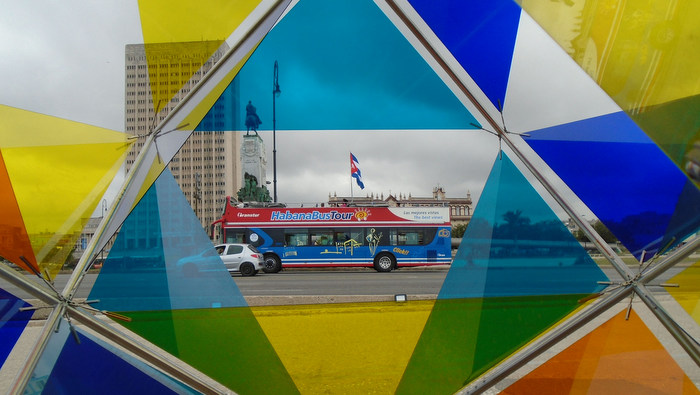 Polychrome Havana, seen from the wall

If there is a place that unites Syrians, Trojans and other tourists of dissimilar origins with the most legitimate essences of the diverse population that (coexists) lives in the Cuban capital, that place is the Malecón. It is the place to agree on the indisputable beauty of a city that, beyond its questionable condition of Wonder City, supports its portals and buildings demolished with the daily life of the people who live there, with their joys and sorrows, their hopes and disappointments, his youth and his old age.

Now that San Cristóbal de La Habana arrives at its five hundredth birthday and the top event of the visual arts, the Havana Biennial takes as its motto a phrase - "The construction of the possible" - which may well allude to the crossroads of its Sustainability over time, the project Behind the Wall reinforces its importance by what it means for the spiritual life of inhabitants, passers-by and visitors who look to the sea without turning their backs on the spaces settled on land.

Since it emerged in the 2012 edition, always by the hand of its creator, the specialist and curator Juan Delgado Calzadilla, it became evident the synergy created between artists, critics and audiences despite the different undertakings and not always happy proposals. One walks from La Punta to the Almejeiras Hospital and, although many break their heads to understand the odd piece, how healthy it is to see them trying to translate it to their individual references and learnings, to their disparate cultures, to their different strata social, claiming to stay where they are, as a way of incorporating them into the urban fabric and of making art a contribution to the beautiful or, at least, the different.

Seven dozen artists - more than half foreigners - from fifteen countries, in addition to inserting their works in the spaces adjoining the "largest sofa in the city", establish - and this is perhaps the most innovative aspect of the 2019 deliver - dialogues with the recipients of the artistic fact, in a continuous process of feedback that gives the inhabitants of the city the possibility of discussing, even from the simple enjoyment of the works, about them, their assembly, the environment itself, through performances, murals, conversations, actions and community workshops given by the creators themselves, where policy makers have also been involved. The waves jump over the wall and splash further in, in the same skeleton of the neighborhoods, their alleys, their plots.

«This is a project of passion—Juanito said at the press conference held at the Embassy of Spain days before the start of the XIII Biennial of Havana— and it becomes a reality thanks to the tenacity of the artists, without them I am not nothing. I am very interested in talent, how it can transform society and the human being. Behind the Wall is a project that links society with art. I am interested that Cubans can dialogue with the artists present. It's about breaking the walls. I am very interested in what is hidden behind these walls, and what is hidden behind every human being ».

It is impossible to name all the pieces; it is better to "walk" them. But there is one (T3C36, by Spanish David Magán) that summarizes in its polychromy the multiple colors of an event that has called attention to the importance - pre-eminence - of culture in a city that pretends to be more and more human. That the passers stop before this work and try to listen to their surroundings from different angles and reflections of light, is a metaphor that should not be ignored.

Previous publication Biennial to point Next publication Romerías de Mayo: a quarter of a century later