A Route for Life 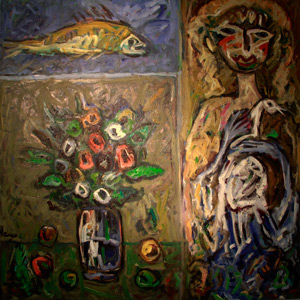 An initiative conceived in Chile suggests the artistic creation as an allied in the treatment of cancer-diagnosed patients. It’s the Ruta de Esperanza en Color (Hope Route in Color), which as projects with similar interests began with personal experiences as testimony of how the efforts and devotion of one person can bring about a bigger work.

The exhibition is made up of 28 oil paintings, twelve of which were painted since February to August 2011, during the six-session chemotherapy treatment applied to professor Dora Formas, a patient diagnosed as having cancer in December 2010. Along with these works, it counts on the contribution of two acclaimed Macedonian creators: Tome Mishev and Chendo, with 6 works each, specially created for this exhibition; and Marysol Salval’s artworks, Spanish artist that has lived in Peru, Argentina and Chile.

This exhibition, commissioned by Emilia Larrachea, turns out to be an expression of love for life, as it’s also a tribute to women as fertility symbol, creation force. Besides, it’s main goal is urging Chilean authorities to establish by law the creation of art workshops for each Regional Hospital in the country with the support and coordination of Arturo Lopez Perez Foundation (Chilean institution against cancer), which will help innumerable patients who fights against prolonged diseases that affect not only their physical integrity, but also psychical.

The project was showcased at the Drugstore Art Gallery, in Santiago, and is to be displayed in several Chilean cities, to continue its journey in the US, Spain, Croatia, Turkey and Macedonia. The next inauguration is scheduled for December 5 in Mall Mirage, Temuco.