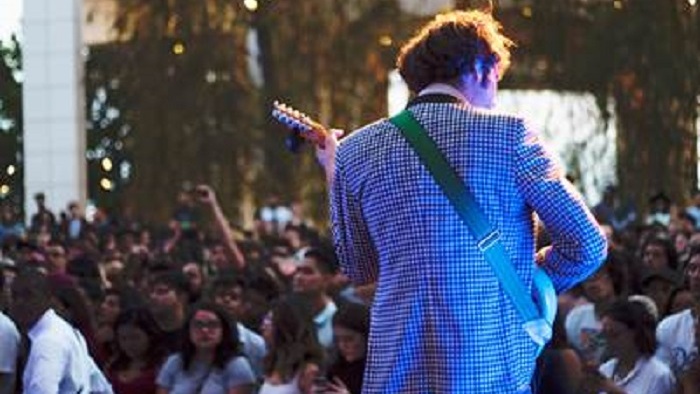 Off the 405 Outdoor Summer Concerts at the Getty

The Getty announces the 2018 line-up for Off the 405, the popular series that transforms the Museum into one of L.A.’s greatest places to see live music. Hailed as the “Best After-Hours Museum Programming” by Los Angeles Magazine, Off the 405 pairs some of today’s most cutting-edge music with breathtaking views and spectacular architecture for an unparalleled outdoor concert experience.

This line-up follows the series’ thrilling kick-off event held on May 19 featuring L.A.’s own Allah-Las, whose beachy tunes drew record crowds. Each show features a DJ set by local tastemakers and special guests starting at 6 p.m. Visitors can wander in the galleries and roam the Central Garden throughout the evening. Cash bars in the courtyard feature local beer, cocktails, and a special menu of snacks.

Taking the stage July 28, is Lola Kirke. Emerging as a new voice in indie music (although a familiar face from the Golden Globe-winning TV show Mozart in the Jungle as well as recent films), Kirke leads a band with beautifully plaintive songs, twanging guitar melodies, and smoky vocals. Echoing the current wave of updated-Americana singer-songwriters including Jenny Lewis, Kevin Morby, and Angel Olsen, Kirke's warm and upbeat music marries the spirit and charm of Dolly Parton with elements of '60s counterculture and a contemporary edge.

The season closes on September 15 with Vagabon, the indie-pop project of Laetitia Tamko. Tamko moved from Cameroon to New York City as a teenager and was inspired to begin recording and performing her original songs after discovering the DIY scene at the Bushwick venue Silent Barn. Blending elements of west and east African music with punk and electronic-leaning instrumentation, Vagabon's powerfully personal songs, buoyed by a soaring, emotional tenor and intricate guitar work, explore questions of community and family from her distinct and original perspective.

All concerts are free and take place in the Museum Courtyard from 6:00–9:00 p.m. No tickets or reservations required. Parking at the Getty Center is $15 and is reduced to $10 after 3:00 p.m.

Friday Flights kicks off June 29 with Montreal-based singer, songwriter and artist, Devon Welsh. After a period away from the music industry, Welsh returns with his debut solo album, Dream Songs, set to be released this year. Sarah Davachi will be the latest in a string of experimental electronic musicians invited to create experiential soundtracks to Robert Irwin’s Central Garden. Her site-specific—and site-transformational—compositions explore intimate aural spaces, utilizing extended durations and simple harmonic structures that emphasize subtle variations in overtone complexity, temperament and intonation, and natural resonances. No)one. Art House will premiere a new site-specific piece for the Getty's fountains choreographed by Samantha Blake Goodman. Moving within the water and across travertine surfaces, dancers will react to the elements and the geometric architectural forms while soundtracked by ambient sounds generated by soulful vocalist and electronic musician Akua accompanied by trumpeter Anthony Calonico. To complement the Getty Research Institute's exhibition Artists and their Books/Books and their Artists, selected Los Angeles-based artists who make books and independent small-print presses will set up shop during each Friday Flights event this summer. This pop-up Artists’ Book Fest is a celebration of the city's thriving community of alternative book-makers, who challenge the conventions of creating, reading, and distributing publications.

Friday Flights is a series of interdisciplinary happenings that bring together a range of Los Angeles-based artists to transform the Getty experience. Flights invites artists to respond to the Getty’s unique architecture and garden and forge new connections to the collections and exhibitions through music, performance, and other creative interventions.