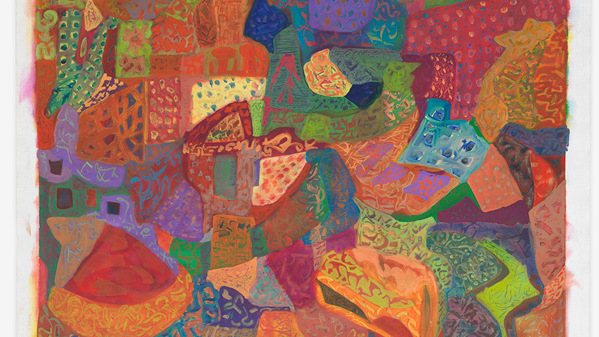 Galerie Lelong & Co. is pleased to be exhibiting Ficre Ghebreyesus's work in France for the first time.

Ghebreyesus (1962-2012) was born in Eritrea at the beginning of the War of Independence, which raged from 1961 to 1991. As a teenager, he became a refugee in Sudan, Italy and Germany before settling in the U.S. where he obtained a degree from the Yale School of Art. He spoke seven languages, played multiple instruments and earned a living as the chef of a popular restaurant, Caffé Adulis, in New Haven, Connecticut. Whilst living there, he married the writer and poet Elizabeth Alexander and had two sons.

Currently featured in the Venice Biennale exhibition 'The Milk of Dreams', Ghebreyesus's work has gained international recognition in recent years. Merging figuration and abstraction, his paintings evoke the fluid and serpentine forms of dreams, memories, and folk tales, such as a school of fish suggesting a group of human figures or a boat emerging from intertwined shapes reminiscent of Eritrean weavings.