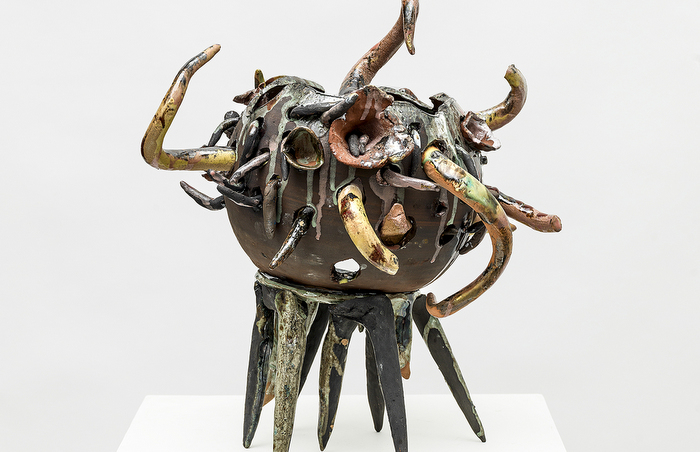 Janaina Torres Galeria is pleased to announce Criatura, Paula Juchem's (Santa Maria, Brazil, 1974) first solo exhibition at the gallery. Curated by Livia Debbane, the show brings a set of around 30 never-before-seen sculptures by the artist, who uses ceramics as a material and poetic force. There are works in different sizes, including two columns with more than three meters - the largest works ever produced by Juchem to date.

Having been featured in this year's edition of the largest art fair in Latin America - Zona Maco, which takes place in Mexico -, Paula Juchem's work is based on freedom and fruition in the construction of forms that come to life through her hands, using the various possibilities that the ceramic process can bring. In her studio, in São Paulo, she assembles, disassembles, changes parts, stacks, undoes and redoes as many times as necessary until she gets where she wants to be.

"I was taken by the uniqueness of Paula Juchem's work, by the imperfect shapes, barely identifiable and at the same time so colorful. I immediately recognized a strong potential to be developed and worked on", says gallery owner Janaina Torres. "Dealing with an ancient material such as ceramics with the freshness with which she freely explores it, in addition to surprising, is charming".

With a degree in Industrial Design from the Federal University of Santa Maria (Brazil), the artist has established, throughout her body of work, a unique, playful and, at the same time, intriguing visual repertoire, marked by the organicity of her forms, which evoke the traces of animals, fungi, bacteria, among other living beings that inhabit the Earth in its plurality. The results are possible and unusual beings-creatures that only exist within the universe of her work.

'Does it still make sense to divide things into natural and artificial? Between reality and fantasy? True or absurd? The ceramic sculptures gathered in the Creature exhibition inhabit the fragile limits of such dichotomies. Produced over the last two years, they materialize possible and unusual entities. In them we recognize traces of organisms that exist – as diverse as octopuses, urchins, mushrooms and lichens – at the same time that we are surprised and laugh at their delusional deviations. These fragments of biological forms appear between layers and accumulations of clay and enamel, in the many accidents that singularize Paula Juchem's production, breaking expectations and destabilizing narratives"

Thus, the curator adds: "In these sculptures we notice sometimes symbiotic sometimes parasitic relationships between existing and created things, elements that dismantle the idealization of a pure and intact nature: a piece of wire, glass, a chain, which with some humor were incorporated and naturalized."

Opening: Saturday, October 1, on special hours from 1 pm to 5 pm