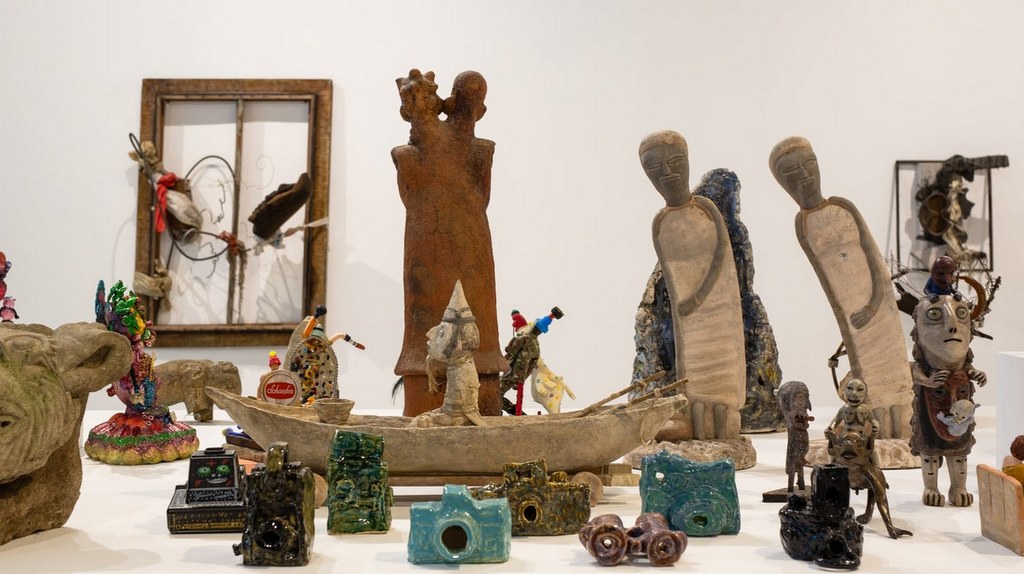 The Outsider Art Fair is excited to present Super-Rough, a large-scale group exhibition of close to two hundred sculptural works by approximately 60 self-taught, visionary and vernacular folk artists from around the world.

Super-Rough, a word play on Superflat—Murakami's highly influential term for a new genre of Japanese Pop Art that emerged at the turn of the millennium, proposes the private and idiosyncratic universe of Outsider Art as an alternative to the ongoing spectacle of contemporary art and popular culture. Also referencing  Outsider Art's DIY dimensionality and handmade aesthetic, Super-Rough offers a diametrical departure from the slick seductive surfaces of a shiny consumer consciousness. At the same time it reflects Murakami's understanding that in visual culture there is equivalence to all manners of art, a super-flattening of prior hierarchical distinctions between fine art and popular or vernacular arts, between what is professional and institutionally ratified and what is self-taught. On the compositional and textural implications of an adjective like "rough" Murakami cites the calligraphic Zen paintings of temple monks and Buddhist sculpture, in which studied refinement gradually drifts towards a rougher abstraction, and how in each there is a forceful connection between refinement and roughness. He also sees a connection between religious art and the spiritual strain in Outsider Art, explaining that "Outsider Artists don't think about unnecessary things, they focus in on that state."

Certain tendencies emerge out of the imaginative unpredictability of these tactile inventions, where assemblage reveals its true cumulative glory—be it a refuse-laden metal bus by the late Dutch master Willem Van Genk (1927-2005), the bead and sequin-encrusted foam works by Monica Valentine; Lonnie Holley's re-imagined and transformed talismans made from found objects and imbued with profoundly metaphorical meaning; Gaston Chaissac's (1910-1964) fanciful collage figures; Bessie Harvey's (1929-1994) deeply religious animations of the wood she foraged; or the architecturally woven miniature thrones that Eugene Von Bruenchenhein (1910-1983) fabricated from bleached chicken and turkey bones. By presenting together these and other esteemed self-taught makers of sculpture–William Edmondson, James Castle, Judith Scott–with a legion of works by anonymous and scarcely known artists, Super-Rough becomes a voyage of discovery more than just a map of the familiar.

Murakami is one of a number of contemporary artists who have supported Outsider Art in recent years (e.g. David Byrne, Maurizio Cattelan, KAWS). He has collected significant works by artists like Henry Darger, but he is clear that he is far from an expert on the subject. He does explain why trained artists might be in a special position to recognize the creative instincts of self-taught artists. "In baseball or soccer you have excellent scouts who can watch young athletes play, they are able to see even then that they have great muscle, agility, build or physique," he offers, "and when we look at self-taught art we can also appreciate this kind of physicality in their work, the agility and flexibility of their hand and brain...the physical perfection is there, they are not trained but they can do it. As artists we train so hard it is sometimes difficult to get out of our shell, we have to think of careers and money, to be able to play by a certain set of rules that allow less creative freedom." It is with an abiding wonder of that raw state, that Super-Rough is dedicated.