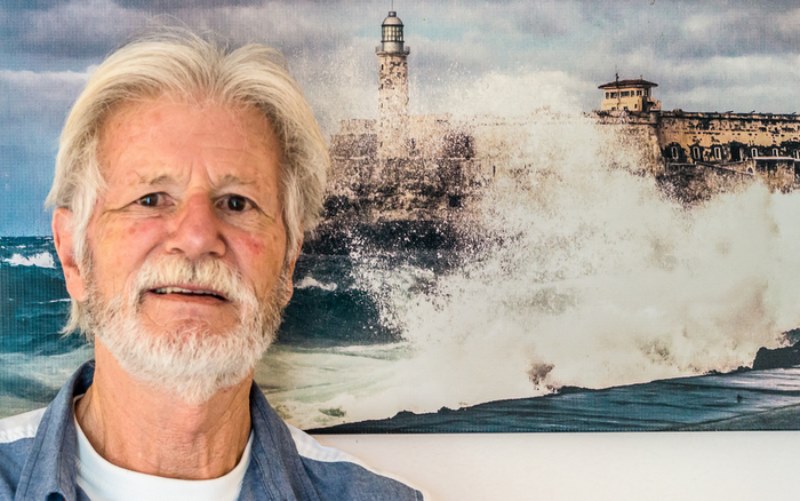 Peter Hubler: "I feel very proud to exhibit in Havana"

“I feel very proud to exhibit in Havana,” he told Arte por Excelencias the Swiss photographer Peter Hubler, after the opening of the temporary exhibition "Reparación de Locomotoras en la Parcela Partagás”, in the Railway Museum, for the activities of Havana on its 500th anniversary.

Can you describe your feelings at the opening of this exhibition with your photos at the Railway Museum?

I felt very proud when the Office of the Historian accepted my donation of photos for its use in the Railway Museum and even more when I saw them in the museum the day of the opening.

How did your passion for photography begin?

I started taking photos with 15 years using my father's camera and an uncle gave me his, obsolete of roll and with a 6x9 cm format.  I learned to take snapshots with a fully manual camera, which helped a lot in my life as a photographer. When in college my father bought me an SLR, I took many photos that I enlarged in the dark chamber and I was able sell the best ones.

What techniques do you prefer for this work with the tropical light and its colors?

I always use the higher resolution and the RAW format, because it has more latitude for corrections on the computer using Adobe Lightroom. With the exhibition I look for a compromise between the extreme shadows and lights. Also, if it’s possible, it is best not to take photos between 10 in the morning and 4 in the afternoon.

What new photographic projects and dreams do you have on this subject?

I will always accompany the life of the locomotives outside and inside of the museum and I will attend the museum with photographic projects if I’m allow. I also leave the dossier of the exhibition to put it also for the consideration of its readers. 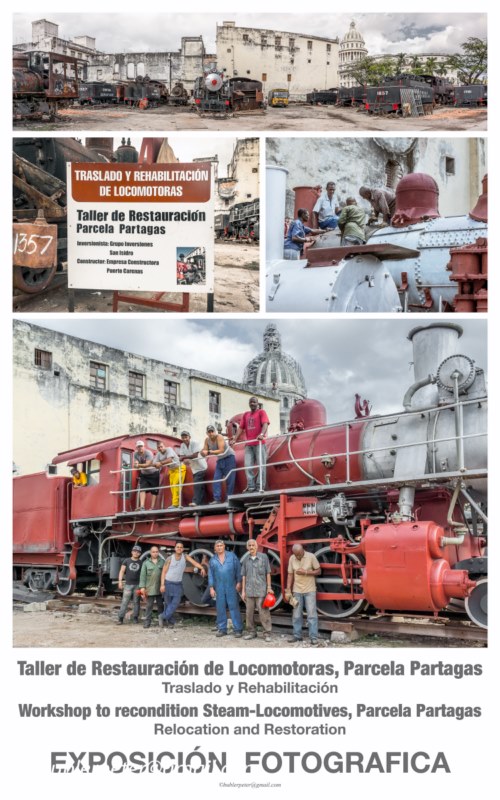 Words of presentation of the exhibition:

The repair yard “Taller de Traslado y Rehabilitación de Locomotoras en la Parcela Partagás” was an important phase in the project of locating, salvaging and restoring steam locomotives from the sugar cane refineries from 2006 to 2015.

It was part of the strategy to recuperate the industrial heritage of Cuba developed by the Office of the Historian of the city of Havana.

The first locomotives came to the Parcela Partagás in 2006 originating from various parts of the country, some in very deteriorated conditions.

In 2015 a total of forty locomotives where recovered and restored at the yard. This phase is now terminated and the yard is closed. The locomotives were mostly moved to the “Museum de Ferrocarril de Cuba” the former train station Cristina, or deployed in various places of Havana, some of them in working conditions.

When I approached the personnel of the workshop with the idea of a photo exhibition they received me enthusiastically and gave me plenty of opportunities to document their work, including some very special events such as the moving of 2 heavy locomotives and the transport from the Capitolio to the railway museum.

I am a retired mechanical engineer and self-educated photographer. Born in Switzerland in 1940 and a permanent resident in Cuba since 2008. I worked all my life designing and building machines of all sorts. So, when I saw these locomotives, I fell in love with them at first sight, those precious old mechanisms, wheels, pistons, levers full of nostalgia of a by gone centuries.

I want to invite the spectators to enjoy this state of transit that for me is Havana, a city that gets you for its energy, history and constructions and every day animates you to rediscover, as I discovered, some years ago, the locomotives of the sugar cane refineries, that you can see displayed today.